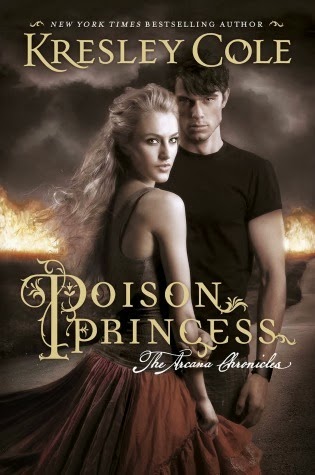 Synopsis: She could save the world—or destroy it.
Sixteen-year-old Evangeline "Evie" Greene leads a charmed life, until she begins experiencing horrifying hallucinations. When an apocalyptic event decimates her Louisiana hometown, Evie realizes her hallucinations were actually visions of the future—and they're still happening. Fighting for her life and desperate for answers, she must turn to her wrong-side-of-the-bayou classmate: Jack Deveaux.But she can't do either alone.With his mile-long rap sheet, wicked grin, and bad attitude, Jack is like no boy Evie has ever known. Even though he once scorned her and everything she represented, he agrees to protect Evie on her quest. She knows she can't totally depend on Jack. If he ever cast that wicked grin her way, could she possibly resist him?Who can Evie trust?As Jack and Evie race to find the source of her visions, they meet others who have gotten the same call. An ancient prophesy is being played out, and Evie is not the only one with special powers. A group of twenty-two teens has been chosen to reenact the ultimate battle between good and evil. But it's not always clear who is on which side.

My Review: I've seen many reviews about this book, and it seems like people either love it or hate it. I was really iffy going into this book, but thankfully I found this book to be amazing! I loved the authors writing and the characters were all so unique and interesting. I couldn't put the book down, and when I had to I was dying to keep reading.
Evie Greene has always been told that her grandmother is crazy! But when her grandmother's words come true about the "end of the world" Evie has to race to find her grandmother who has all the answers. But things are never that easy, Evie hears voices in her head and experiences crazy visions of death and witches. And if that's not crazy enough for you, she can control plants. Follow Evie on her quest to find her grandmother, while facing cannibals, evil Bagmen, and her sexy partner Jack.I absolutely love the world that this book is set in. Not only is it described perfectly, but we also get to see many places instead of just one town. The author also did a fantastic job with the timeline. She skips over a huge part of the characters story while it was just her and her mom trying to survive for the first few days, and I thought that was prefect, if she wrote that in the book would have been huge and boring, and it was definitely different since most books everything happens all at once to the characters.I had mixed emotions about Evie, for most of the book I really liked her. I loved how she felt so broken because of her summer, and then she went back to school and was able to put on a fake face just like that. Also I loved watching her develop throughout the book, she becomes so interesting by the end of the book. But there were definitely some parts about her that made me mad, like when she was going to tell her boyfriend that she was ready.. meanwhile she totally had feelings for someone else.. not cool! Also she was really naive at the beginning of her and Jack's adventure. But I must say that I was pretty impressed with her character, and no one can be completely perfect.Jack was a fantastic character. I love the fact that he was Cajun. Reading the French in the book was so enjoyable for me, I love French and I've been learning for a while, it was easy enough to understand and it always comes with translations so you wont be lost. I love Jack's attitude, hes definitely a loving character, even though he hides most of his emotions due to his past. I definitely recommend this book to any lovers of post-apocalyptic books. You will not be disappointed in this one. Thanks for reading,-Aneta
Posted by Aneta at 4:00 PM