The Last Changeling by Chelsea Pitcher 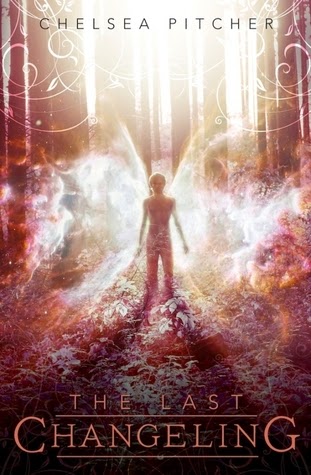 Synopsis: A Kingdom at War . . .
Elora, the young princess of the Dark Faeries, plans to overthrow her tyrannical mother, the Dark Queen, and bring equality to faeriekind. All she has to do is convince her mother’s loathed enemy, the Bright Queen, to join her cause. But the Bright Queen demands an offering first: a human boy who is a “young leader of men.”
A Dark Princess In Disguise . . .
To steal a mortal, Elora must become a mortal—at least, by all appearances. And infiltrating a high school is surprisingly easy. When Elora meets Taylor, the seventeen-year-old who’s plotting to overthrow a ruthless bully, she thinks she’s found her offering . . . until she starts to fall in love.

My Review: The Last Changeling follows Elora as she begins on her quest to put an end to her mothers rule. In order to get the Bright Queen on her side, she must switch bodies with a human and pretend to be her, in order to take a boy back for the Bright Queen as requested. What Elora wasn't expecting was to make friends, and even fall in love.
This book has me torn form the beginning. While the book does have a lot of potential, it doesn't do much to impress you. While the idea of the world and the characters is good, it leaves you with a 'meh' feeling.
Elora is a character that I do admire. She's the Dark Faery Princess, which sounds like it would be super cool right? Well the book is set in the human world, so we don't really get to know about her as a faery other than the story she tells us.
I tried my hardest to relate to her in some way, but I just couldn't. She was a 'good' character, but there was nothing amazing or impressive about her. Even though she was the main character, she seemed as plain as a background character that only gets mentioned once in a book.
I liked Taylor a little bit more than Elora. If it wasn't for Taylors point of view in the story I would have most likely stopped reading. After his brother's death, Taylor blames himself and has been secluded from family and friends until Elora arrives.
Again, just like Elora there was nothing special about Taylor. In fact, I would actually say that he's even more annoying than Elora since he constantly wines and cries out for Elora not to leave him. Yet in his point of view there were some pretty funny moments that made me laugh which made his side of the story so much more enjoyable.
The plot of the story was alright. It seemed fairly predictable and there wasn't much action until the very end of the book. Either way it felt a little dry in most parts of the book.
The world-bulding wasn't great either. There wasn't too much descriptions and either way the characters didn't really go to many places other than the school and Taylor's house. As for Elora's land, we didn't get much description, just the basics of her story.
Overall, I would not recommend this book. I found it fairly boring and plain. There was so much potential with the idea of Elora's power but it wasn't fully used. While this book did have a really cute ending, I would not waste that much time getting to it.
Happy Reading,
-Aneta
Posted by Aneta at 6:00 AM