Review: All the Stars Left Behind by Ashely Graham 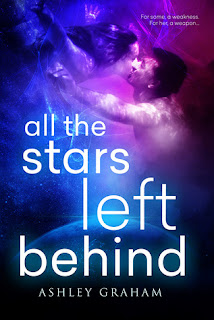 Synopsis: Relocating to Arctic Norway would put a freeze on anyone’s social life. For Leda Lindgren, with her crutches and a chip on her shoulder the size of her former Manhattan home, the frozen tundra is just as boring as it sounds. Until she meets her uncle’s gorgeous employee.
Unfortunately, no matter how smoking hot the guy is, Roar comes with secrets as unnerving as his moving tattoos. And Leda doesn’t trust him.
Roar shouldn’t be drawn to the moody human girl with eyes that leave him weak in the knees. But when Leda gets shot by one of his enemies and survives, Roar finally understands why he’s drawn to her: Leda is exactly what he was sent to Earth to find. A weapon of immense power capable of saving his planet.
She just doesn’t know it yet.

My Review
Oh the predictability and the cliches. It was all too much.
After the death of her father, Leda moves to Norway to live with her uncle. When Leda meets Roar, their world is flipped upside down and the two feel a very strong attraction for one another, the only problem is that Roar is an alien sent to Earth to look for the secret weapon to save his home planet. Will Leda be a distraction to his mission or will their attraction prove to be useful in finding the secret weapon.
Leda was a very good main character. If the situation was different I could definitely see myself loving her. She's very strong, and she doesn't let having a disability slow her down. She's definitely got the right attitude and is willing to go down fighting for what she believes.
Yet, the reason I couldn't bring myself to love Leda, was because of the romance with Roar. I cannot tell you how much I hate insta love. The first time they meet you get the slow motion, no one else in the room but them moment, and when they hold hands their hearts flutter and they can't stop thinking about one another. Ugh the amount of eye rolls per chapter was on a new level for me. While this type of love may happen to some people, for 99% of the normal population, things like this don't happen. Then later in the story you get the, "Oh, it turns out we can't be together after all, but I still love you" type of thing. The romance is basically Twilight, but with aliens. Thank god there wasn't a love triangle, I'm pretty sure I would have DNF the book.
While this book is a fairly short read, the beginning dragged on so long that I couldn't get myself to pick up this book to keep reading, and I ended up dragging it out. There wasn't a lot of action or anything to keep the reader interested in the beginning of the story, unless you're really into aliens or insta-love. Around 70% the action started to pick up, but at this point the story became so predictable that you could tell exactly what was going to happen without having to finish the book.
This probably would have been a one star review, but I decided to go with two stars because I was really impressed with how well the author used diversity in her book. You have a main character with a disability, a transgender character, multiple gay characters, ect. Also I was extremely happy that the book was set in Norway and the author used terms and landscape from there, I would have loved to see more research, but I was happy with a book being set somewhere other than America.
Overall, I really would not recommend this book, unless you are into the cliche type of story or are really into aliens. The author put in a lot into this book but unfortunately the romance and the plot needed some more work. Hopefully her next one is better.
Happy Reading,
Aneta
Posted by Aneta at 1:00 AM