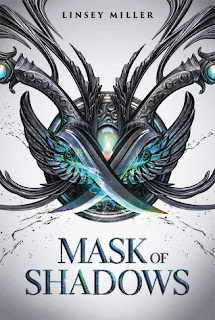 
Synopsis: Sallot Leon is a thief, and a good one at that. But gender fluid Sal wants nothing more than to escape the drudgery of life as a highway robber and get closer to the upper-class and the nobles who destroyed their home.
When Sal Leon steals a poster announcing open auditions for the Left Hand, a powerful collection of the Queen's personal assassins named for the rings she wears -- Ruby, Emeral, Amethyst, and Opal -- their world changes. They know it's a chance for a new life.
Except the audition is a fight to the death filled with clever circus acrobats, lethal apothecaries, and vicious ex-soldiers. A childhood as a common criminal hardly prepared Sal for the trials. But Sal must survive to put their real reason for auditioning into play: revenge.

My Review
Mask of Shadows was absolutely brilliant. Perfect for all fans of YA fantasy.
Sal's homeland was destroyed by shadows, and the nobles used her people as bait to slow down the shadows so that they can escape. Forced to become a thief at a young age, Sal is used to sneaking around and fighting to the death, so when an opportunity comes up where Sal can audition to become a member of the Queen's Left Hand, Sal immediately seizes the opportunity to get close enough to kill those who have wronged Sal's homeland. Sal is named Twenty-Three and must outsmart and outlast the other twenty two competitors in order to become Opal.
Sal was a wonderful main character. This was my first time reading a book with a gender fluid main character, and I absolutely loved it. At first I thought I would get confused when other characters were speaking to or about Sal but I was never confused, I also love how it was kind of similar to how our current time period is with the GLBT community, where a lot of people are accepting and understand, but there are others who chose to challenge this and be disrespectful, which one character in this book was. I feel like the author did a great job writing this (although since I'm not a part of the GLBT community, I can't be a true judge of that). I truly loved Sal's personality, Sal was always kind to the servants and other staff, but was also very smart and knew how to be ruthless and when to kill. Sal definitely reminded me a bit of Celeana Sardothien from Throne of Glass, especially since they were both so confident, yet kind in the right moments.
This book started off very fast. It basically just jumps right into the competition within three chapters. While this is good because there was tons of action right from the start, it also kind of sucks because we don't get to know the world and the character as well in the beginning.
The plot is wonderful, yet very generic when it comes to YA fantasy books. It has a lot of similarities with Throne of Glass series and Hunger Games. While I love those types of books, I really do wish that there was something about Mask of Shadows that set it apart from the other books in this genre.
Most of this book was fairly predictable, the ending did surprise me a bit, especially within the last 2-3 chapters. While I have a feeling I know how the next book will turn out, I'm still super excited to read it, and see what Sal does next.
Happy Reading,
Aneta
Posted by Aneta at 1:00 AM