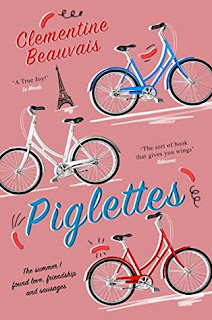 Synopsis: Awarded the Gold, Silver and Bronze trotters after a vote by their classmates on Facebook, Mireille, Astrid and Hakima are officially the three ugliest girls in their school, but does that mean they're going to sit around crying about it?
Well... yes, a bit, but not for long! Climbing aboard their bikes, the trio set off on a summer roadtrip to Paris, their goal: a garden party with the French president. As news of their trip spreads they become stars of social media and television. With the eyes of the nation upon them the girls find fame, friendship and happiness, and still have time to consume an enormous amount of food along the way.

My Review
Piglettes is an adorable and inspiring novel. I would love to share this one with my younger self.
Mireille is angry that she got bronze on the schools yearly Ugly list. For the past two years she's won gold, and this year someone took away her #1 spot and now she's in third. Marielle knows how to deal with being called names, and she doesn't let that affect her. But when she confronts the first and second place winners, she realizes that they are not as easy going as her. The three girls band together, and against all odds they plan a bike trip to Paris, proving everyone who said they couldn't do it wrong, the three girls embark on their trip, each for a different reason.
I am a huge supporter of books written in other languages being translated to English. We definitely need more of that, and I was stoked to be able to review this book. I instantly fell in love with the characters, the story and the message this book was sending. It has such beautiful writing, but its done in a way where the reader can laugh along with the main characters.
I love that this book had diversity in it, and dealt with some really important issues, such as bullying, family problems, and wounded soldiers. This book was meant for early highschoolers and the 15 years of age group, but some of the things the author talked about were very mature and I am so glad she did it in a gentle way where its easy for people to understand.
While I really did love the message of the story and the characters. There were parts of the story that seemed to drag on quite a bit, and there wasn't a lot of action or excitement, the book is mainly focused on character development of all three girls and their chaperone.
I definitely recommend giving this book a read, it will make you laugh and your heart swell with joy. Best of luck to the author, I hope to see more books like this in the future.
Happy Reading,
Aneta
Posted by Aneta at 2:00 AM