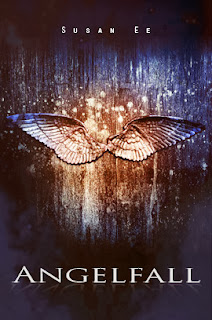 Goodreads Summary: It's been six weeks since angels of the apocalypse descended to demolish the modern world. Street gangs rule the day while fear and superstition rule the night. When warrior angels fly away with a helpless little girl, her seventeen-year-old sister Penryn will do anything to get her back.
Anything, including making a deal with an enemy angel.
Raffe is a warrior who lies broken and wingless on the street. After eons of fighting his own battles, he finds himself being rescued from a desperate situation by a half-starved teenage girl.
Traveling through a dark and twisted Northern California, they have only each other to rely on for survival. Together, they journey toward the angels' stronghold in San Francisco where she'll risk everything to rescue her sister and he'll put himself at the mercy of his greatest enemies for the chance to be made whole again.
Recommended for ages 16 and up.

My Review: This book was so good, that I read it in 6 hours, and didn't even leave the room to go pee!
It is the perfect combination of Fantasy and Dystopia brought to a whole new level.
Penryn Young lives with her schizophrenic mother, and sister who permanently sits in a wheelchair. In a world rules by vicious gangs in the day, and dangerous Angels at night, Penryn and her family try to find shelter. But when they walk right in the middle of an Angel battle, her sister is taken and Penryn's mission becomes to find her again, even if it means working with an Angel.
I honestly can't tell you how good this book was. I love how this post-apocalyptic world is filled with Angels instead of zombies or just people in controlled cities. It really brings Fantasy and Dystopia together, and if you're a fan of both like me, then you will die for this book! Most of the time we think of Angels being the good guys, but Susan definitely brings an edge to the Angels in this series, and it is pure perfection!
Now lets talk about the characters, Penryn has everything I love in a female character. She knows how to fight, she doesn't take crap form anyone else, and she never gives up! I absolutely loved everything about her! I know this description of the main character was short, but I really want to talk about Raffe.
OH. MY. GOD. GIRLS!!! Whoever your current book boyfriend is, you can just drop him right now (I'll probably apologize to Will Herondale later..) and feast your eyes on this beautiful creature. He is your new knight in shining armor that comes to your rescue whenever you need him! And as all the bad boys we love, he is a little cocky, and arrogant, but after you get to know him, he turns into your prince charming that shows you how much he loves you and how much he cares! And the best part is, hes half naked most of time since hes an angel, and he has Angel wings (well sort of).
Lets just say, I'm in love with this guy!
You know when you finish a really good book, and then you're sitting in your room freaking out about how much you need the sequel this very moment.. yeah that's me! This book should be ranked with City of Bones, Vampire Academy, Divergent, and all the other famous books out there! It is that good!!!
You have to read this right now, I'm not giving you a choice!
Love Aneta <3