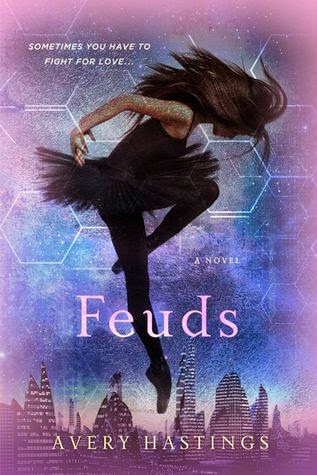 Synopsis: In this breathless story of impossible love, perfection comes at a deadly cost.
For Davis Morrow, perfection is a daily reality. Like all Priors, Davis has spent her whole life primed to be smarter, stronger, and more graceful than the lowly Imperfects, or “Imps.” A fiercely ambitious ballerina, Davis is only a few weeks away from qualifying for the Olympiads and finally living up to her mother’s legacy when she meets Cole, a mysterious boy who leaves her with more questions each time he disappears.Davis has no idea that Cole has his own agenda, or that he’s a rising star in the FEUDS, an underground fighting ring where Priors gamble on Imps. Cole has every reason to hate Davis—her father’s campaign hinges on the total segregation of the Imps and Priors—but despite his best efforts, Cole finds himself as drawn to Davis as she is to him.Then Narxis, a deadly virus, takes its hold--and Davis’s friends start dying. When the Priors refuse to acknowledge the epidemic, Davis has no one to turn to but Cole. Falling in love was never part of their plan, but their love may be the only thing that can save her world...in Avery Hastings's Feuds.

My Review: Feuds is a classic Romeo and Juliet love story, with a fascinating dystopian twist.
In a world where people can be genetically modified at birth, Davis is meant to be perfect. From her intelligence to her ballet moves. When she meets Cole at a friends party, they fall in love at first sight. What Davis doesn't know is that Cole is not as perfect as she imagines him to be, in fact he's not perfect at all. Cole was not genetically modified at birth, he is poor and will do anything to make enough money to sustain his family, including taking a picture of him and Davis for money.I had such high hopes for this book. I find the cover to be absolutely beautiful and the synopsis to be very intriguing. Yet when I started to read this book, I was disappointed from start to finish.There was so many problems with this book, that I don't even know where to start. So I guess lets just start with the biggest problem of them all, the romance. Like I said this is a very Romeo and Juliet type love story, and I don't mean that in a good way. The characters fall in love at first sight (boring!) and then try their hardest to be together even though society doesn't let them. I guess that doesn't sound too bad from my explanation, but trust me when I say that this story is all romance, no plot what so ever. The things that these characters do for 'love' are utterly stupid and irresponsible, even though this is a Fiction novel, I can't see anyone actually doing things that these characters would.Davis is a Gen, meaning genetically perfect. She is supposed to be intelligent, athletic and beautiful. Well she is athletic, that's sadly one of the only things I like about her. And I guess you could say she is beautiful, but she is one of the least intelligent characters I have ever met. I honestly think my dog is smarter than her. First of all, she couldn't figure out that Cole wasn't a Gen like her. If she truly was intelligent, she would have figured it out from super easy signs like Cole not having a DirectTalk (cell phone thing) or that he never mentioned his last name, where hes from, what school he goes to and things like that. Davis's character also does pretty dumb things, like sneaking out of the city where people literally want to kill her, just to see Cole, I mean how dumb could you get. There's even a moment in the book where she believes that she wants to die if she can't be with Cole. That might have been cute back in the fourteenth century, but now that just considered incredibly stupid, especially for someone who's supposed to be intelligent. Her character's perspective was just painful to read from.On the other hand, I must say I liked Cole a little bit more than Davis. Don't get me wrong, he is still pretty stupid, but a tad less than Davis. I really do admire the fact that Cole lives in poverty, yet he has such a strong heart to try to raise money for his family. Now hes not supposed to be intelligent, or at least not as intelligent as Davis, but he still did some pretty stupid things. First of all, he gets offered a job get a picture of him kissing Davis. I don't know, but doesn't that just scream "RED LIGHT" to you? Obviously that picture is going to get out somehow, and you will be in a pickle when it does. I have no clue why he would agree to it, that just ridiculous. So throughout the book, we hear about how hes only in the FEUDS just for the money because he really want to take care of his family, yet near the end of the book he completely ditches his family all for Davis. I guess you could say that's kind of romantic, but when you look at character development, that send him back light-years! He pretty much just threw away his family, something that he's cared about for such a long time, to be with Davis, a girl who he recently met, who's dying from a disease where they haven't figured out a cure. I'm sorry what?!?!The plot line of the story is.. well actually there isn't one. I couldn't tell what the climax was, or even if there was one in the first place. This story is all romance, and by that I mean all kisses, that literally it. There's tons of detail about what the characters think, but there's not plot line, or world-building. While I do think that this book has major potential to be great, because it really is a great idea about the Narxis aspect and the forbidden romance, it just isn't. If this book went through a major edition process, I feel like it could be a huge hit, but for now, I give it a thumbs down. And sadly I would not recommend this book to anyone, well maybe if you're a giant fan of forbidden love, but even then its a maybe. If you do decide to pick up this book, I really hope you enjoy it more than me.-Aneta
Posted by Aneta at 7:00 AM