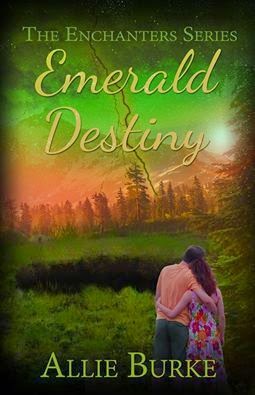 Synopsis: What happens when the girl you’ve loved since you were six years old runs away from you, effectively breaking your heart again? Evan is about to find out.
Nineteen-year-old Evan spends his time in the woods of Dare Forest where the trees have personality, as close to Abby as he can be. But love has a cruel master and everyone around him has forbidden he contact her.Abby’s nights are stressed with her Enchanter life, her dreaded nightmares, and her enduring will to save her brother from his own inner darkness. But when Evan speaks to her for the first time in fourteen years, she finds his voice too painful to bear.Countless times before them, the union between their opposing families has failed and caused unfathomable destruction. The love in their hearts strives to be together forever, but will their destinies break them apart?Allie Burke’s second novel in The Enchanters Series breaks through the Paranormal Romance genre to not just entertain her readers but to empower and inspire them to embrace the momentous question: What would you do when faced with an impossible love?

My Review: At six years old, Abby and Evan have been forbidden to see one another, but nothing can stand in the way of true love. Thirteen years later, Abby and Evan battle their fate and try to be together, yet the life of an Enchanter is always dangerous.
Emerald Destiny is set around 20 years after Violet Midnight and focuses on Elias and Jane's children, as well as Christian and his son. With new characters, young love, old relationships revisited and action around every corner, Emerald Destiny is the perfect sequel.If you loved Jane and Elias, and the romance they shared together, you will love reading about Abby and Evan even more. The characters are more complex, and their romance is so much more realistic. They have secretly loved each other for so long, that when they finally get the chance to be together it turns into a beautiful moment, this building relationship is so much better to read about than instant love. I couldn't be happier with the romance.The new characters in this book are all so unique and diverse, its honestly a pleasure reading about them all. While Abby is the cute and funny young woman who has such a fun and carefree attitude, her twin brother Daniel is almost the exact opposite, he has an inner darkness which sometimes makes him angry and volatile, but we also get to see the sweet and insecure side to him as he talks about the girl he loves. The relationship that the twins have is one that every brother and sister should have. When one of them needs the other, they are always there for each other, even though they might not show how much they care for each other on the outside, you can definitely tell how much they love one another through the small things they do. Their relationship has honestly made me wish that I wasn't an only child. We also get to read the book from Christian's point of view as he reflects on his past with Jane, and their relationship before Elias was around. We get to see Christian go through major character development as he realizes what he did wrong in his past, and tries to make a better future for Evan. While I am not so keen on Elias and Jane's parenting style, I found Christian to be the perfect father figure in the end, which made me admire him so much more.This book isn't perfect, there were definitely some small things I would have changed like adding more of the backstory when Abby and Evan were little. But the small imperfections are so easy to look through because the characters, the romance, and the amount of action this book has are all so wonderful that you forget the small details.While this book is a very fast read, its also a book that you can't put down once you start. The action and crazy romance make you want to keep reading until you're done.If you've read the first book in the series, you definitely have to read Emerald Destiny, no matter what you opinion was on the first book, the sequel is much better and has lots of new characters to enjoy. I highly recommend this whole series, the writing and characters are so easy to fall in love with, everyone could find something that they love in these books.Happy Reading,-Aneta
Posted by Aneta at 8:00 AM