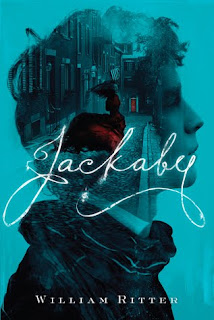 Synopsis: “Miss Rook, I am not an occultist,” Jackaby said. “I have a gift that allows me to see truth where others see the illusion--and there are many illusions. All the world’s a stage, as they say, and I seem to have the only seat in the house with a view behind the curtain.”
Newly arrived in New Fiddleham, New England, 1892, and in need of a job, Abigail Rook meets R. F. Jackaby, an investigator of the unexplained with a keen eye for the extraordinary--including the ability to see supernatural beings. Abigail has a gift for noticing ordinary but important details, which makes her perfect for the position of Jackaby’s assistant. On her first day, Abigail finds herself in the midst of a thrilling case: A serial killer is on the loose. The police are convinced it’s an ordinary villain, but Jackaby is certain it’s a nonhuman creature, whose existence the police--with the exception of a handsome young detective named Charlie Cane--deny.Doctor Who meets Sherlock in William Ritter’s debut novel, which features a detective of the paranormal as seen through the eyes of his adventurous and intelligent assistant in a tale brimming with cheeky humor and a dose of the macabre.

My Review
“I wondered which was sadder, leaving someone to cry after you were gone, or not having anyone who would miss you in the first place” Jackaby is an adorable read about a quirky detective and his adventurous assistant. After running away from home, Abigail Rook is finally out of money. With no one hiring, Abigail turns to Mr. Jackaby for employment. Being an assistant to a detective of the paranormal isn't as easy job as Abigail thought it would be. As Abigail gets a new perspective on her world, a murderer is killing innocent people, and its up to Jackaby and Abigail to solve the mystery before more innocent people are left for the dead.I found this book to be absolutely adorable. It has cute, yet interesting characters that are very loveable. The dialogue in this story is absolutely hilarious, some of the things Mr. Jackaby said had me tearing up laughing.If you're looking for a serious mystery book, this isn't it. While the plot of this book was definitely a mystery, it does involve the paranormal, which all fantasy lovers will adore. While the plot does keep you engaged and guessing who the murderer could be, it wasn't too hard to guess who the real villain could be, or at least narrow it down to a few people, so there weren't too many surprises. Also a small heads up, this book does not contain a romance. So if those are the types of books you're interested in, I would also give this book a pass.I would have loved to give this book 5 stars, but unfortunately I thought it could have used a little bit more mystery, and I'm not sure how I feel about a lack of romance in this book. Overall, it was still a wonderful book, and I definitely recommend it to all fantasy lovers. I will definitely continue on with the series.Happy reading,- Aneta
Posted by Aneta at 4:00 AM