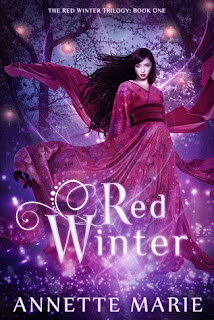 Synopsis:  In a few short months, Emi's mortal life will end when she becomes the human host of an immortal goddess. Carefully hidden from those who would destroy her, she has prepared her mind, body, and soul to unite with the goddess—and not once has she doubted her chosen fate.
Shiro is a spirit of the earth and an enemy of the goddess Emi will soon host. Mystery shrouds his every move and his ruby eyes shine with cunning she can’t match and dares not trust. But she saved his life, and until his debt is paid, he is hers to command—whether she wants him or not.
On the day they meet, everything Emi believes comes undone, swept away like snow upon the winter wind. For the first time, she wants to change her fate—but how can she erase a destiny already wrought in stone? Against the power of the gods, Shiro is her only hope … and hope is all she has left.

My Review
“Actions change our course, influence our futures, but intentions define us, empower us. Without intent, we are nothing.”
Red Winter is an outstanding novel. Even though it had a rough beginning, the book ended up being absolutely amazing. Definitely worth it.
Emi is a kamigakari, soon Amaterasu will descend to Earth where Emi and Amaterasu will become one, sharing her body and helping heal the planet, at least thats what Emi has always believed. When Emi comes upon a book, telling her that when Amaterasu descends, she will destroy Emi's mind and soul, taking Emi's body for herself.
The first time I started reading this book I ended up putting it down and forgetting about it. I didn't get very far, but I was already bored with the story and the characters. Emi was one of the worst main characters ever. She was selfish, annoying and extremely weak. She basically has no backbone, and lets everyone else talk her down and decide her future for her, its almost like she doesn't even think for herself. The part that really broke my heart was the fact that she became so obsessed with becoming the kamigakari that she completely ignored her parents, and didn't even realize that her mother was dying of cancer until it was too late.
While the beginning of this story was lame, as soon as you meet Shiro, the kitsune the whole book basically changes. Shiro is one sexy fox. You instantly fall in love with him and his personality, he makes the story so much more interesting. The moment he enters the story theres action, theres adventure and the story takes off and becomes AMAZING.
The plot past this point gets really intense. Tons of action, new characters and you really get to see the rest of the world that Annette created, its captivating and absolutely beautiful. I want to take a moment to recognize how much work Annette Marie did for this book. She must have spent hours researching and planning, usually when authors write stories about other cultures they tend to mess it up, but Annette got the Japanese culture down perfectly, the history, the characters, it was all amazing. Annette did a fantastic job with this book.
Near the end of the story, I started warming up to Emi. I still don't really like her, but she's finally learning to take action into her own hands and she's fighting for her future. Her character development has gone very far already, but I'm hoping to see more in the future books.
Overall, I'm really impressed with Annette's writing style, and how much work she puts into her books. This would have been a 5 star book for me if it wasn't for the main character. I still highly recommend this book, especially if you love fantasy and/or Japanese culture. I can't wait to start book two.
Happy Reading,
Aneta
Posted by Aneta at 1:00 AM