Review: Ever the Brave by Erin Summerill 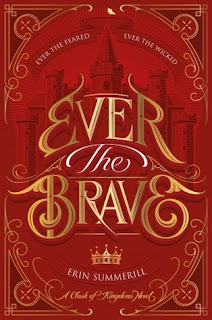 Synopsis: Ever the Divided. Ever the Feared. Ever the Brave.
After saving King Aodren with her newfound Channeler powers, Britta only wants to live a peaceful life in her childhood home. Unfortunately, saving the King has created a tether between them she cannot sever, no matter how much she'd like to, and now he's insisting on making her a noble lady. And there are those who want to use Britta’s power for evil designs. If Britta cannot find a way to harness her new magical ability, her life—as well as her country—may be lost.The stakes are higher than ever in the sequel to Ever the Hunted, as Britta struggles to protect her kingdom and her heart.

My Review
Britta believed that all of her work was done when she freed King Aodren from the other Channeller. That is, until the new Channeller reveals herself to Britta as her own mother, who escaped after saving Britta's life when she was little. Britta, Aodren and Cohen must stop Britta's mother before she murders any more channellers, and becomes powerful enough to kill the King and take over the land.Honestly, I found myself enjoying book one a lot more than this. Don't get me wrong, I still enjoyed the plot and I do love Britta as the main character, but there were so many things about this books that I didn't like or would have loved to change.Britta really grew on me in book one, and I have to say that she gets even better in this book. She is so strong and just a badass. She kind of had the mentality that "I don't care if its wrong or not proper, I'm doing this because I want to and it feels right." She was an absolute delight once again.I had a lot of problems with the romance in this book once again. Unlike Britta, Cohen didn't go through any character development. He stayed the exact same overprotective and somewhat sexist guy. In this book he admits to being overprotective and jealous at times, yet he doesn't do anything about it, he's not willing to change, and what frustrates me the most is that Britta is perfectly fine wth this.I really did like Aodren. Not only is he the king but he's also insanely kind and such a good guy. In the beginning he sort of tries to buy Britta's love with expensive gifts, which of course she denies and doesn't even use, but its the through that counts right? Later on he really shows his character when he ends up saving Brittan and just showing how brave he is and how much he would do for her. I enjoyed his character development so much, and I really think that he would have been better for Britta.The plot of the story was interesting, and it definitely kept me engaged. Although I found it to be very predictable. The part about her mother being the bad guy, who Britta ends up with, and the ending was all so clear right from the beginning of the book. There weren't any surprises, so it made me a tad bored.Overall, I really enjoyed this story and Britta will definitely go down as one of my favourite female characters. I just wish that the romance was better and the book wasn't so predictable. I still highly recommend this duology to all fantasy and YA lovers.Happy Reading,Aneta
Posted by Aneta at 8:38 AM