Review: Bring Me Their Hearts by Sara Wolf 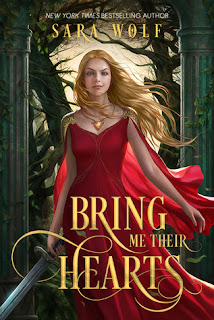 Synopsis: Zera is a Heartless – the immortal, unageing soldier of a witch. Bound to the witch Nightsinger ever since she saved her from the bandits who murdered her family, Zera longs for freedom from the woods they hide in. With her heart in a jar under Nightsinger’s control, she serves the witch unquestioningly.

My Review
I feel like I've said this before, but this book will definitely go down as the favourite for 2018. I usually write reviews right after finishing books, but with Bring Me Their Hearts I had to take a step back and actually work up the courage to write a review good enough to describe this masterpiece. Zera would do anything to go back to her old life, but sadly she is a heartless who's had her heart taken from her when she was at the brink of death, by a witch who saved her life and now she must do the witch's bidding. The only perks of her new life is that she cant be killed (at least not by normal things) and she doesn't age. But when rumours of another war start spreading the witch's devise a plan to turn the prince into a heartless to bribe the king, and the best person for the job is Zera. Posed as a long lost niece, Zera becomes one of the contenders to be the prince's new bride. Zera though the job would be easy, she never expected to start falling for the prince.Oh my goodness I can't even begin to describe how much I love Zera to you guys. She is brilliant, sassy, strong and such a well rounded character. She starts off as an amazing character, and then somehow gets even more amazing by the end. Half of the things coming out of Zara's mouth made me stop reading because I was laughing so hard, if you love the strong and witty female character types (like Sarah J Maas characters) you will definitely love Zera. The other leading characters in this novel were also very unique in their own way, but all absolutely brilliant. Lucien definitely has that brooding character trope, that actually has a heart of gold once you get to know him, and even though I though he was a tad stupid for trusting Zera so easily, it was still cute to watch his character development. Malachite was probably my favourite (right after Zera), he is the prince's guard and also his best friend, he is just as witty as Zera and makes a great friend. Throughout this whole book, I was really worried that I was going to have to give this book four stars rather than five for being too predictable. Because clearly right from the beginning you get the hint that yes Zera will end up falling for the prince and it will be very difficult for her to do her job, and she most likely wont end up doing it. You also can clearly tell who the bad guy of the story is, and assume that he will try to kill the main characters near the end of the book. And while yes these things did happen, there were two other twists in the story right at the end of the book that I was definitely not expecting. While I was pleasantly surprised that I was surprised (ya see what I did there?) at the events at the end of the book, I was a little sad because it has a huge cliffhanger ending and now I'll have to wait forever to find out what happens next.Overall, amazing main character, fantastic supporting characters and a great story in general. It was hilarious, serious and a truly fantastic novel. While it was a tad predictable, it did surprise me in the end. Fair warning, huge cliffhanger ending at the end, so this will definitely be a first novel in a series. I cannot wait to continue this series, and I will definitely be checking out more from this author.