The Chaos of Stars by Kiersten White 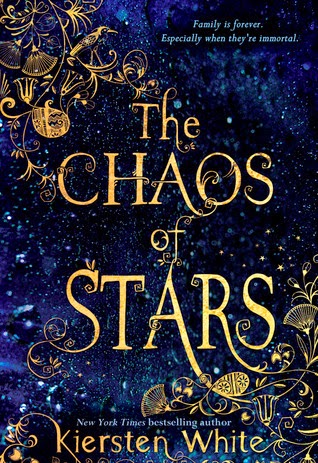 Synopsis: Kiersten White, New York Times bestselling author of Paranormalcy, is back with The Chaos of Stars—an enchanting novel set in Egypt and San Diego that captures the magic of first love and the eternally complicated truth about family.
Isadora's family is seriously screwed up—which comes with the territory when you're the human daughter of the ancient Egyptian gods Isis and Osiris. Isadora is tired of living with crazy relatives who think she's only worthy of a passing glance—so when she gets the chance to move to California with her brother, she jumps on it. But her new life comes with plenty of its own dramatic—and dangerous—complications . . . and Isadora quickly learns there's no such thing as a clean break from family.
Blending Ally Carter's humor and the romance of Cynthia Hand'sUnearthly, The Chaos of Stars takes readers on an unforgettable journey halfway across the world and back, and proves there's no place like home.

My Review: The Chaos of Stars is a fantastic and informative book that not only shares a fantastic story, but also teaches you about Egyptian history in an entertaining way. It is the perfect book for everyone.
Isadora isn't your typical teenage girl. She is the daughter of the famous Egyptian God and Goddess, Osiris and Isis. When Isadora gets a chance to escape her crazy family, she takes the first opportunity she gets. Her world is turned upside down when she travels to California, a place completely different than what she's used to, but there's a danger lurking around the corner, as Isadora makes friends and re-connects with her brother Osiris, she has to decode her strange dreams, and figure out who's causing the danger.
I have always been a huge fan of Ancient Egypt, yet for some strange reason I've never read a fiction book that revolves around my favorite historical area. When I found this book in the library, I was instantly drawn to it, and I must say that it didn't disappoint. The author's sense of writing not only gives you an amazing story, but there's also little blurbs in the beginning of every chapter that explain the history of the two gods. I honestly felt like I was learning so much, and the way it was explained made me wish that Kiersten was my history teacher, then maybe I would have gotten better marks because let me tell you, I could not put this book down.
Now onto the main character. In the beginning of the book, I wasn't too fond of Isadora. I mean she's the daughter of two Egyptian gods, and she tries her hardest to look the least bit Egyptian she can. That killed me on the inside. I would do anything to look as beautiful as an Egyptian goddess, especially one as beautiful as Isis. Yet by the middle of the book, I definitely got to understand Isadora, and grow with her as her character developed, and ended up agreeing with her on some issues she goes through. This definitely showed me a new side to Isadora and I ended up falling in love with her.
The supporting characters were all amazing! I honestly love every single one of them. I love how we got to know some of the other gods like Anubis and Horus, as well as Isadora's new friends in California. They were all so unique and interesting, I couldn't help but be interested in all of them.
There wasn't too much world-building to this story. We get to read about some of the places Isadora goes to in California, but they're not deeply developed. There are some details, but not as much as I was looking for.
Overall, this book is definitely amazing based on the history and character aspect of the story. I feel like everyone who would pick up this book could find something that they love about it because it could definitely reach to a wide audience. If this book had a little more detail and world-building, it would have been a solid 5/5.
Happy Reading,
Love Aneta.
Posted by Aneta at 9:00 AM