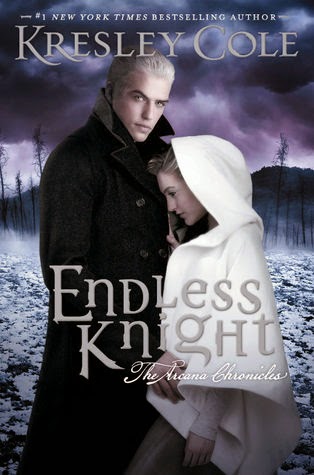 Synopsis: In this seductive follow-up to Poison Princess, #1 New York Timesbestselling author Kresley Cole takes us deeper into the dark world of the Arcana Chronicles.

Shocking secrets
Evie has fully come into her powers as the Tarot Empress, and Jack was there to see it all. She now knows that the teens who've been reincarnated as the Tarot are in the throes of an epic battle. It's kill or be killed, and the future of mankind hangs in the balance.

Unexpected allies
With threats lurking around every corner, Evie is forced to trust her newfound alliance. Together they must fight not only other Arcana, but also Bagmen zombies, post-apocalyptic storms, and cannibals.

Gut-wrenching treachery
When Evie meets Death, things get even more complicated. Though falling for Jack, she's drawn to the dangerous Endless Knight as well. Somehow the Empress and Death share a history, one that Evie can't remember--but Death can't forget...

My Review: In the anticipated sequel to Poison Princess, we follow Evie and the gang as they head to find Evie's grandmother who could tell her how to stop Death. As their trail leads them through a mountain, cornered by mines, Bagmen and Cannibals, Evie must fight in order to save her life. With new allies, new adventures and new romances, Endless Knight is the sequel thats a million times better than the first book.
Like I said above, I found this book to so much better than the last one, and that usually never happens with sequels which is why I'm giving this book so much praise.
In the beginning, Jack and Evie are still fighting, which had me worried that this is going to be another one of those sequels where the couple just fights the whole time. But worry not because this is not one of those books. Its true that it leads you through an emotional roller coaster... but its a good roller coaster!
The character development in this book is absolutely fantastic! Watching Evie change from the small insecure girl who couldn't survive on her own, to being the leader of their group and actually having the courage to attack on her own really surprised me. It's so wonderful to watch a character grow like that, and it really made me love Evie in a new way.
The whole idea of the Arcana has me really intrigued. I love love love reading about them and learning alongside Evie what each of the characters do. But the best part about it is that they all seem like norma human beings and they all have such diversity among them, you just can't help but love them.
Spoiler Territory, this is only for those who have either read the first book and aren't afraid of somewhat big spoilers, or have already read this book.
The love-triangle between Evie, Jack and Aric... its killing me.
This whole time I was team Jack, and then all of a sudden Kresley brings in Aric being all smart and hot.. like what? I was not expecting this.
Now I don't even who which team I'm on anymore, I'm stuck right in the middle because I love both guys. Which is why I give props to Kresley for a fantastic love triangle!
I really enjoy Lark as a character, and I really hope that this book can end without her or Finn having to die so that hopefully they can make up and be together.
End of Spoilers.
Overall, this book really impressed me. I loved the first book, but this one just took it to a whole new level and I loved it. If you haven't read the first book, do so now! The series is one thats worth sticking to the end. And if you've read the first book but didn't like it too much, I highly encourage you to pick up the second book because it is much better than the last.
Happy Reading,
-Aneta
Posted by Aneta at 5:28 PM