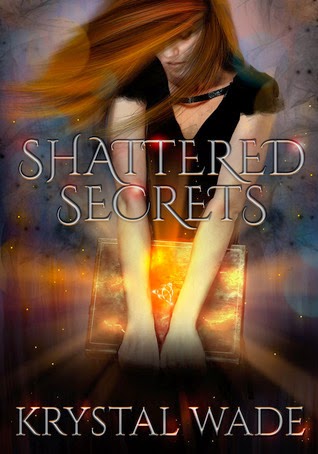 Synopsis: After being kidnapped, hogtied, and stuffed in the trunk of a car, seventeen-year-old Abigail Nichols' boy problems seem unimportant.
She couldn't be more wrong.
The boy who saves her holds her heart.
But Derick Crawford also holds secrets.
Magical beings who guide human emotions are fighting an invisible war dating back to the dawn of time, and Abigail's one of them. The more she learns of her heritage, the less she wants to know. Armed with a very old, very massive book to teach them about their history, Abigail and Derick run away to a place where they think they can be safe and happy, only to have their troubles secretly hitch a ride.
Her history book is in a sharing mood, and it tells her to keep a secret of her own.
But has she put her trust in the wrong place?
And will the world survive if she has?

My Review: Abigail loves Derick. After sharing their first kiss Derick completely stopped talking to Abigail without a reason why. As Abigail comes back form her first date after suffering form the heartbreak, she is kidnapped and taken to a cabin in the woods. What Abigail is about to find out is that her life might not be as normal as she thought it was. With her family keeping secrets, a new threat and two boys fighting over her, Abigail is in a huge mess.
I really wanted to give up on it when I started reading it, but I was determined to stick with this one till the end and write a review for it. If it wasn't for that I would have stopped reading. I kept putting the book down because it was really boring and I found the characters action to be silly and not a lot of action going on.
A little after half way, the action pick up really well so the book got way more exciting, except the characters were still a little iffy to me. It wasn't until the last few chapters where the characters travel to a different place where I finally said "Oh wow, this is actually kind of cool." If the book was like that from the start I would have loved it, but sadly it wasn't.
The main character Abigail was nothing special, there wasn't anything about her that made me fall in love with her as a character. There were moments where I could somewhat relate to her or sympathize her emotions but that still wasn't enough to make me like her.
The swoon in this story wasn't that great either. I found him to be really annoying and childish at some moments, I was not impressed.
Honestly, if it wasn't for the ending of this book, I probably would have rated it one star, but the end was so fantastic that it makes me want to read more of this story.
I have no idea if I will continue on with the series, and I do recommend this book to people who don't really care for much action. Hopefully you like the characters and plot more than I did.
Happy reading,
-Aneta
Posted by Aneta at 6:00 AM