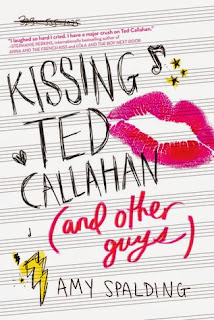 Synopsis: Nick and Norah's Infinite Playlist meets Easy A in this hilariously realistic story of sneaking out, making out, and playing in a band.
After catching their bandmates in a compromising position, sixteen-year-old Los Angelenos Riley and Reid become painfully aware of the romance missing from their own lives. And so a pact is formed: they'll both try to make something happen with their respective crushes and document the experiences in a shared notebook.
While Reid struggles with the moral dilemma of adopting a dog to win over someone's heart, Riley tries to make progress with Ted Callahan, who she's been obsessed with forever-His floppy hair! His undeniable intelligence! But suddenly cute guys are popping up everywhere. How did she never notice them before?! With their love lives going from 0 to 60 in the blink of an eye, Riley and Reid realize the results of their pact may be more than they bargained for.

My Review
Kissing Ted Callahan is basically about two band members trying to get some action because they're jealous that two of their other band members are hooking up.
I want to say that this book is meant for people who are just entering high school (so obviously I'm way too old for this), but I also don't recommend people who are 15 or 16 to be so focused on hooking up and having relationships, so I'm not exactly sure where the book belongs.
The main character, Riley, accidentally walks in on her best friend Lucy and fellow band member Nathan hooking up. This causes Riley and new best friend Reid to rethink their love lives. They aim to help each other find love/sex while writing it all down in a diary-type book called Passenger Manifest. Riley has a huge crush on Ted Callahan, but things with him are going very slow, so she decides to see two other guys during the process. And we all know, dating three guys at once is never a good thing.
I found both main characters, Riley and Reid, extremely annoying and whiny. First of all, your life isn't over if you don't have sex by the time your sixteen, and if you do have sex, do it for love, not to get back at your best friend.
If I didnt know they were sixteen, I would have guessed this book was about college students. Likes seriously, where is your mother?
Even though this was a short read, I almost gave up. Nothing about this book interested me. The music, the plot, the characters, I found it all very boring.
Unfortunately I would not recommend this book to anyone. It will most likely make you cringe or piss you off. Better luck next time.
Happy Reading,
-Aneta
Posted by Aneta at 4:30 AM