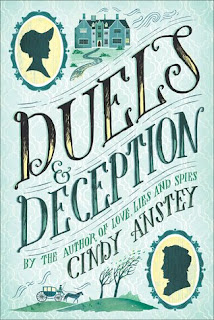 Synopsis: Miss Lydia Whitfield, heiress to the family fortune, has her future entirely planned out. She will run the family estate until she marries the man of her late father's choosing, and then she will spend the rest of her days as a devoted wife. Confident in those arrangements, Lydia has tasked her young law clerk, Mr. Robert Newton, to begin drawing up the marriage contracts. Everything is going according to plan.
Until Lydia—and Robert along with her—is kidnapped. Someone is after her fortune and won't hesitate to destroy her reputation to get it. With Robert's help, Lydia strives to keep her family's good name intact and expose whoever is behind the devious plot. But as their investigation delves deeper and their affections for each other grow, Lydia starts to wonder whether her carefully planned future is in fact what she truly wants…

My Review
Duels and Deception was a great read. The main characters are amazing, the world building is great and the plot line will keep you entertained.Lydia Whitfield must do everything she can to keep her father's land from her greedy uncle, who will plummet the profit of the family. When Lydia devises a plan, along with a lawyer called Robert Newton, to finalize Lydia's marriage early to Lord Aldershot, in order to inherit her estate faster. But on her way to meet Robert to sign the marriage papers, Lydia and Robert are kidnapped, and barely escape. But when someone starts threatening Lydia's status and Robert's job, they must work together to solve the mystery of who is trying to blackmail them.I absolutely loved the two main characters. Lydia is the type of fierce woman that I love to read about, especially in the time period that she is in. Usually in the 1800s, all women cared about are looking pretty and attracting a man, but not Lydia, she cares about her family's well being, earning money and her education. I was extremely impressed with Lydia, words cannot describe it. She is selfless and such a well rounded character.Robert was also a fantastic character, he is focused on his career, he is a very kind man that knows how to outwit anyone when he needs to. He and Lydia make the most perfect pair, they are very similar, but when their differences do arise, they compliment each other so well. I definitely ship them.The characters that I had a problem with, were basically all the side characters. Lydia's whole family is just crazy, and annoying. I definitely give props to Lydia for surviving with them for so long, because I don't think I could. Lydia's best friend Cora was okay, but she didn't do anything that made me really like her as a character, I found her romance to be a bit annoying. Robert's boss Mr. Lynch was just crazy and didn't help the story whatsoever, and Robert's best friend Cassidy was stupid and a pig... The only side characters I liked was the couple that took Lydia in after being kidnapped, and unfortunately they were only in the story for two chapters. The world-building in this book was very well done. The author must have done a lot of research because her descriptions on the land, the attire, the way people talk and the norms of society were so well explained, it really felt like I was transported back in time. I loved it.The plot line of this story was very good. The action starts at around 30% in, and theres definitely enough action to keep you interested. While the book itself doesn't get boring, I did find the plot to be a little predictable. I was able to guess who was behind the blackmail early on, and a bunch of other little things, before they were revealed in the story. Overall, I would definitely recommend the book to all historical fiction lovers, especially if you love books set in the early 1800s period. It is perfect for romance and action fans, as long as you're okay with it being a tad predictable. Happy Reading,Aneta
Posted by Aneta at 1:00 AM