Review: The Evaporation of Sofi Snow by Mary Weber 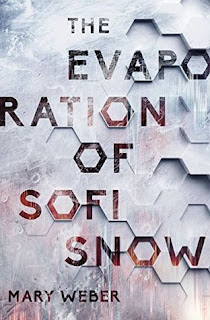 Synopsis: Ever since the Delonese ice-planet arrived eleven years ago, Sofi's dreams have been vivid. Alien. In a system where Earth's corporations rule in place of governments and the humanoid race orbiting the moon are allies, her only constant has been her younger brother, Shilo. As an online gamer, Sofi battles behind the scenes of Earth's Fantasy Fighting arena where Shilo is forced to compete in a mix of real and virtual blood sport. But when a bomb takes out a quarter of the arena, Sofi's the only one who believes Shilo survived. She has dreams of him. And she's convinced he's been taken to the ice-planet.

My Review
I loved Mary's Storm Siren trilogy, so I was expecting to love this one as well. I honestly had to push myself to get through it, it was so hard. I was bored, I didn't like the characters and the plot was extremely predictable. During World War IV, a planet of aliens arrived beside Earth and brought the War to a stop. Now, the world is split into 30 Corporations, where one team from each corporation must battle in Earth's Fantasy Fighting arena, the winners (and those deemed worthy enough) will become famous and rich, while the losers are sold to a life of misery. Sofi and Shilo are forced to enter the games by their mother, the Ambassador for Corporation 30, during the games a mysterious bomb goes off. While being carried to the emergency room, Sofi wakes up and sees that her brother is being taken away by the aliens, and later learns that her own Corporation wants her dead. Determined to find her brother, Sofi sets out on a mission to get him back from the aliens and make both of them evaporate. I honestly thought I was going to love Sofi, she's the type of character I usually adore in books, but for some reason I wasn't a huge fan. I didn't hate her, but I didn't like her either, she was very.. meh. The romance in this story was very weird. Miguel and Sofi dated a few years back. He ended up leaving, and Sofi was crushed. Turns out that Miguel still loves Sofi and hasn't slept with anyone since.. and now Sofi hates his guts. I honestly feel like this backstory is a little too much, personally if I was in Sofi's place I would never get back together with this guy, I never liked him throughout the book. When the two ended up having some moments it seemed very awkward and cringy. It's not a romance I could ever ship.The first third of the book I truly did enjoy. It was basically the hunger games arena style, but the players could change the arena themselves to try to kill the other players. It was very entertaining and I was excited to see what would happen next. Then once the bomb went off and Sofi went on her mission things started to slow down and then the romance came in and I just wanted to put the book down. The main problem with the second part of the story was how predictable it was. I guessed who the bad guy was right at the beginning, and I was right. It was easy to tell that the "alien planet" wasn't actually a planet (how would a planet travel through space without being in orbit) and lots of other things.I really wanted to enjoy this book, but unfortunately it wasn't the one for me. I hope that you enjoy it more than I did if you do plan on reading it.Happy Reading,Aneta
Posted by Aneta at 1:00 AM