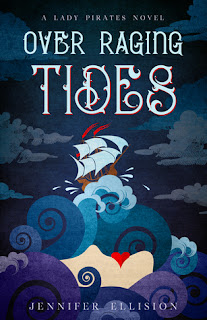 Over Raging Tides by Jennifer Ellision
The pirate crew of the Lady Luck lives by many rules, but chief among them is this: they do not allow men on board. That’s a rule that quartermaster Grace Porter is willing to break when a shipwrecked young nobleman offers her information of an omniscient map, stolen from his warship by an enemy vessel. Until now, the map was only the stuff of legend… but with its help, Grace may finally be able to hunt down the Mordgris, the sea monsters who stole her mother away from her.Unfortunately, some members of her crew have other plans...To find the map and face the Mordgris, Grace will have to confront her past, put the Luck between warring nations, and uncover treachery aboard the ship. And ultimately, her revenge and the destruction of the Mordgris will come at a hefty price: the betrayal of her crew.Grace promised them they wouldn’t regret this.She just isn’t sure that she won’t.

Empress of All Seasons by Emiko Jean
In a palace of illusions, nothing is what it seems.Each generation, a competition is held to find the next empress of Honoku. The rules are simple. Survive the palace’s enchanted seasonal rooms. Conquer Winter, Spring, Summer, and Fall. Marry the prince. All are eligible to compete—all except y?kai, supernatural monsters and spirits whom the human emperor is determined to enslave and destroy. Mari has spent a lifetime training to become empress. Winning should be easy. And it would be, if she weren't hiding a dangerous secret. Mari is a y?kai with the ability to transform into a terrifying monster. If discovered, her life will be forfeit. As she struggles to keep her true identity hidden, Mari’s fate collides with that of Taro, the prince who has no desire to inherit the imperial throne, and Akira, a half-human, half-y?kai outcast. Torn between duty and love, loyalty and betrayal, vengeance and forgiveness, the choices of Mari, Taro, and Akira will decide the fate of Honoku in this beautifully written, edge-of-your-seat YA fantasy.Taro, Mari, and Akira come face to face in the Palace of Illusions where their true destinies are revealed. Torn between duty and love, loyalty and betrayal, vengeance and forgiveness, their choices will decide the fate of Honoku itself.

I've been in a huge pirate book mood after finishing Daughter of the Siren Queen, so I went ahead and requested Over Raging Tides, to read after I finish up my exams in two weeks. I also requested Empress of All Seasons, now it doesn't have a cover yet, but that synopsis already has me dying to read it. That's all I got this week, what did you guys get?
Posted by Aneta at 1:00 AM