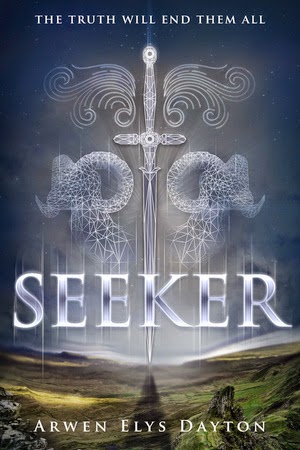 Synopsis: Quin Kincaid has been put through years of brutal training for what she thinks is the noble purpose of becoming a revered ‘Seeker’.
Only when it’s too late does she discover she will be using her new-found knowledge and training to become an assassin. Quin's new role will take her around the globe, from a remote estate in Scotland to a bustling, futuristic Hong Kong where the past she thought she had escaped will finally catch up with her.

My Review: "She was a Seeker now, marked for life."
Seeker is a epic fantasy story revolving around Quin, Shinobu and John. This book had amazing writing and world building, but sadly it fell short in plot and character development. While I did like the book in the end, it took a lot of will power for me to finish this book.After years of training, Quin and Shinobu finally become Seekers, what they didn't expect was both their fathers being bribed by money to kill innocent people. With a knife at her throat, Quin is forced to become a Seeker and follow her fathers orders. As opportunities rise, Quin escapes with an ancient object used by the Seekers, in order to stop her father and the evil he has done.I found this book to have so much potential, yet the book never really did anything with it. I love the idea of the Seekers and fantasy behind this whole book. The characters live in such a cool place and they travel to other places that honestly make me jealous and want to travel all over the world. But even though the world-building was fantastic, they never really went deeper into the history and duties of a Seeker which left me kind of puzzled.The characters in this book were alright, there were some moments where I loved them, but most of the time I was frustrated with them.Quin was one of the frustrating ones. While I loved how caring she was and how she felt so bad for doing all the things her father asked her to, I found her to be quite stupid. I do realize that she went through a lot, I mean I would be in rough shape too if I found out my father murdered children, but she just ends up running away from her problems rather than facing them, and she hopes that would make things better, which is obviously a bad mistake.Shinobu was by far my favourite character of the book. I found his side of the story to be hilarious and adventurous. He does some crazy stuff in the middle of the book, but his intentions are always right, especially when it comes to Quin and his family.I hate John. There I said it. He's a liar, he's crazy and I don't like him.The plot of the story is what really made me dislike this book. While the story itself was good, the plot dragged on what felt like forever. There were definitely parts that could have been cut or shortened down to make the book go by faster, otherwise I feel like the reader is going to want to put the book down. The plot line didn't really get interesting till about 85% in, and for a 400+ page book thats a long time to wait.Overall, this book really good and I enjoyed it, but the boring plot and some characters really dragged it down for me. I would still recommend this book to all Fantasy fans, as long as you don't need to much action to keep you interested. I'm looking forward to book 2, hoping that its much more interesting.Happy Reading,-Aneta
Posted by Aneta at 3:00 AM