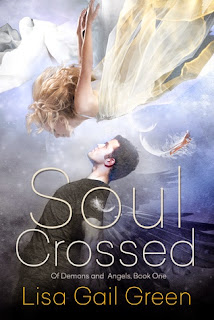 Josh lived a reckless, selfish life, so upon his death, escaping the eternal torments of Hell by assuming the role of a powerful, soul-corrupting demon is an easy choice. His first soul assignment doesn’t seem too hard: the mortal Camden is already obsessed with weapons, pain, and torture. If only Josh wasn’t distracted by Cam's beautiful friend, Grace.

Grace never expected to die violently at age sixteen, but now she’s an Angel, responsible for saving a soul. She can already see past Camden’s earthly flaws, so the job should be be easy. If only that handsome, playboy Josh would stop getting in the way.

It’s forbidden for an Angel to be with a Demon, so if Josh and Grace stop resisting each other, the results would be disastrous.

And only one can claim Cam’s soul.

My Review
"I think evil isn't so cut and dry. Sometimes it wears the face of a friend or an average person. That's what makes it so insidious."
She was killed by a drunk driver. Sent to heaven, Grace has been given the chance to become an angel, but first she must save Camen's soul, the boy who just might be the antichrist.
Josh was the drunk driver that killed Grace, and ultimately killed himself in the process. Sent to hell, Lucifer gives him the choice of eternal torment, or helping him turn Camden to the dark side.
Angels aren't meant to fall in love with demons, especially ones who killed them in their previous life.
Soul Crossed is a very fast and easy read. While it doesn't take much to get into the book, the book itself is very predictable.
I really wish I could have liked this book more, it definitely had the potential because the storyline is very creative. Yet I didn't like any of the characters, and I predicted everything that happened in the book.
Grace is a very sweet and pretty girl. I loved how she was so nice and helpful, but she was also very naive, and an idiot at times. She just kept making mistakes after mistakes, its like she wasn't even focused on her mission half the time, which made me really mad.
I wasn't a fan of Josh as well, he was supposed to be this tough yet broken guy because of his father, but all we hear from him is "wow it sucks I'm a demon" and "Damn I wanna do that Grace girl." His part of the book was just boring.
And the only thing I have to say about Camden was that he is super creepy!
Of course the romance in this book was insta love. And it wasn't even the cute insta love where you're rooting for the couple to be together. No, this was the - I wanna barf - type of insta love. Of course they're attracted to each other right from the beginning, and then they think they're soul mates and care more about each other than the mission they were sent on. Seriously open your eyes people, you're already dead!
Overall, it had potential, but the crappy romance and characters ruined it. If you decide to give this book a try, I hope you like it more than I did.
Happy Reading,
- Aneta
Posted by Aneta at 4:00 AM