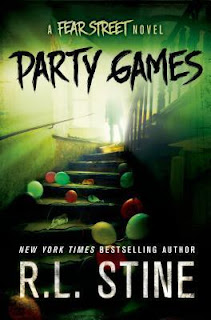 Synopsis: Her friends warn her not to go to Brendan Fear's birthday party at his family's estate on mysterious Fear Island. But Rachel Martin has a crush on Brendan and is excited to be invited. Brendan has a lot of party games planned. But one game no one planned intrudes on his party—the game of murder. As the guests start dying one by one, Rachel realizes to her horror that she and the other teenagers are trapped on the tiny island with someone who may want to kill them all. How to escape this deadly game? Rachel doesn't know whom she can trust. She should have realized that nothing is as it seems… on Fear Island.
R.L. Stine makes his triumphant return to Shadyside, a town of nightmares, shadows, and genuine terror, and to the bestselling series that began his career writing horror for the juvenile market, in the new Fear Street book Party Games.

My Review
If you love classic spooky stories by R.L. Stine, then definitely give this one a try. It will definitely get you spooked.
Rachel has always had a crush on Brendan Fear, and when he invites her to his birthday party of course she had to say yes, this could be her one chance to get to know him. Even though Rachel was warned by people not to trust Brendan Fear and go to the party, the opportunity was too good to turn down. Finding herself on a summer island home, completely cut off from the rest of the world, Rachel is ready to play some party games. But who wants to play party games that involve a murderer in the house with their own twist to the game?
This isn't the first Fear Street Relaunch book I've read, the other two had given me such high expectations (mostly because they were both so amazing I couldn't put them down) but sadly this one just wasn't as good at the others.
I'm sure if I didn't have such high expectations, I probably would have liked this book much more. But here is why I didn't think it was as good.
While I get this book was supposed to be a mystery, the constant change of the plot, and new mysteries appearing once one was solved, just left me kind of bored. It felt like I was reading three books in one. And unfortunately, the plot didn't get me in that "I need to stay up till I finish this book" mood, and I just ended up putting it off.
The main character was alright. She was nice and normal, but she didn't have anything special about her. She was a plane Jane in an exciting story, and she didn't always handle it very well. It's not that I didn't like reading in her perspective, but I didn't love it, which was very unfortunate. As for the other characters, I really did like a few of them, especially Brendan and Eric. I found them to be more entertaining than the main character herself.
The one aspect I loved was the world building, we get a chance to explore the mansion and the rest of Fear Island, and the descriptions of the places were absolutely amazing. It really made you feel like you were almost there.
Unfortunately not every book can be a hit, but I will definitely continue reading this series. Hoping that the next books are better than this one.
Happy Reading,
Aneta
Posted by Aneta at 3:00 AM