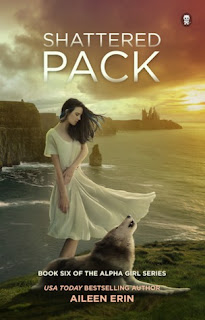 Shattered Pack by Aileen Erin (Alpha Girl #6)
Meredith Molloney never thought she’d find a mate, let alone someone like Donovan Murry—one of the most powerful Alphas alive. Now that she’s no longer cursed and the evil Luciana Alvarez has been taken care of, she thinks life will finally settle down. Boy, has she never been so wrong.
In the middle of the night, Donovan gets a call telling him that his pack has gone to pieces. The news that his second in command has been found brutally murdered has Donovan packing his bags for Ireland, but the last thing Meredith wants to do is leave Texas. She’s heard about how the Celtic Pack are with outsiders. And Donovan has more than a few exes in the pack that will be less than friendly.
Meredith’s never let a few angry wolves stop her, and she’s not about to start now. She’s faced down much worse the past few months. But when she gets there, she finds that it’s not just a few exes who stand in the way between her and her Full Moon Ceremony with Donovan.
Meredith is thrust in to a deadly game of pack politics, one the fey have happily joined in on. When the dust settles, she knows she’ll either have everything that she wants or lose it all. 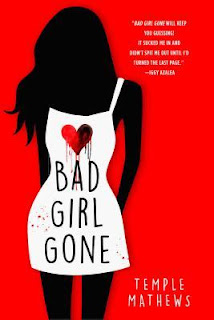 Bad Girl Gone by Temple Mathews
Sixteen year-old Echo Stone awakens in a cold sweat in a dark room, having no idea where she is or how she got there. But she soon finds out she s in Middle House, an orphanage filled with mysteriously troubled kids.
There s just one problem: she s not an orphan. Her parents are very much alive.
She explains this to everyone, but no one will listen. After befriending a sympathetic (and handsome) boy, Echo is able to escape Middle House and rush home, only to discover it sealed off by crime scene tape and covered in the evidence of a terrible and violent crime. As Echo grapples with this world-shattering information, she spots her parents driving by and rushes to flag them down. Standing in the middle of street, waving her arms to get their attention, her parents car drives right through her.
She was right. Her parents are alive but she s not.
She s a ghost, just like all the other denizens of Middle House. Desperate to somehow get her life back and reconnect with her still-alive boyfriend, Echo embarks on a quest to solve her own murder. As the list of suspects grows, the quest evolves into a journey of self-discovery in which she learns she wasn t quite the girl she thought she was. In a twist of fate, she s presented with one last chance to reclaim her life and must make a decision which will either haunt her or bless her forever.

What did you guys get this week? Let me know in the comments.
Posted by Aneta at 7:20 AM