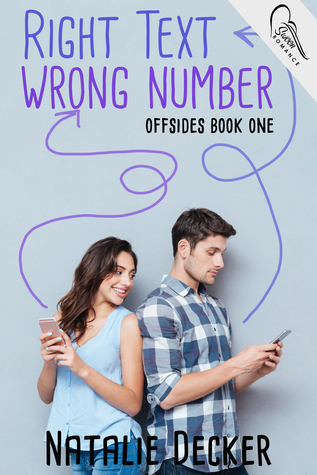 
Synopsis: High school juniors, Layla and Tyler, are complete opposites. Sure she’s a cheerleader and he’s a football player, but she thinks he’s the biggest jerk in the school and he thinks she is too high on her horse to even be worth of a second glance from him. And when the two of them are near one another, sparks fly in all the wrong directions. They are NOT interested in speaking to one another, let alone date.
But when Layla unknowingly sends Tyler a smack-down text meant for the girl sending naked photos to her then-boyfriend, Adam, Tyler has no idea it’s Layla and decides to play along. After all, Tyler cannot resist messing with the pissed off girl firing off texts about junk pictures, cheating, and girl code.
As the fallout from Adam’s sexting scandal plays out in front of the entire school, Tyler and Layla secretly continue to text one another using fake names. But as days and weeks pass, things take a turn for the serious between them, and suddenly, their texts mean more. They both begin to consider revealing their true identity to the other and taking the relationship from texts to dates, then kissing and maybe more.
They say there’s a thin line between love and hate. Can reality live up to the fantasy, or will Layla and Tyler be forever offsides?

Goodreads / Amazon
—
EXCERPT:
Beep! Beeeeeeeeep! “Stop screwing with your phone and pay attention to the road!” I blow my horn some more. The light is green, has been for a good forty seconds. I glance over at my best friend for some support for my general crabbiness this morning. She’s not giving it though, she’s too busy tapping away on her own cellphone.
“You believe this guy? Same to you, Buddy!” I yell as I catch his middle finger pop up in front of his rearview mirror.
Rachel doesn’t say anything. She’s still engrossed in messages from whomever is texting her. Possibly the latest gossip, or party happening. Who knows?
I’m usually a perky, non-violent person. All of this has seemed to change recently. I saw an episode on the news about how much society is turning into walking mutants because they’re so absorbed in their phones. You won’t catch me searching for the perfect snap shot of yourself, only to be mauled by a huge mountain lion ready to pounce from behind. I don’t want to be mauled by some crazy animal in a park. I mean how awful would that be, death-by-selfie. So, I gave up on taking poses in the cute outfits I wear and selfies altogether.
And don’t get me started on texting. I loathe it. I know what you’re thinking. What kind of weirdo hates texting? The kind who’s dyslexic. And when everything looks like absolute gibberish anyway, and now I have to read words on a small screen just to find out who made out with whom; no thanks. If it weren’t for my text-to-voice app, I’d be screwed. People would think I’m a complete airhead because I couldn’t decipher a silly text.
“Sorry; what were you having a beyotch fit about?” Rachel asks drawing my eyes from the road and landing on her. “Austin was telling me what happened to Jared during football practice yesterday. Plus, I guess there is this monster party after the game Friday. You in or out?” She looks up from her phone.
“In,” I answer reverting my attention to the line of cars turning into the school’s parking lot. I know my boyfriend Adam will want to go hang out with his team so it’s a given that I’ll be tagging along. Although I really would rather it just be him and me this weekend. Lately we’re either in group functions, at parties, on double dates at the movies, or hanging out with his friends. I just want some me-time with him. No disgusting belching contests happening in the background or listening to other couples make out next to me. Gross.
“Austin wants to know if your sister’s coming?”
This question shakes me from my miserable funk, and I snort laugh. My twin sister at a party? HA-HA-HA. OMG; I think I peed my pants a little. “That’s not happening. Unless the words ‘book,’ ‘ComicCon,’ or ‘mud’ were in front of the word ‘party.’ Then she’d probably go. But yeah; no. Why’s does he want to know? Is he crushing on my sister?” That could be news I could get down with.
“He said one of the guys was asking.”
Raising a brow, I inquire, “Which one?” It’s probably Chase, but that would be weird considering he’s her best friend and knows her daily schedule.
She’s tapping away again as I pull up to the school parking lot. “He won’t say.”
“Why not?”
“Do you really care or are you just morbidly interested that someone might actually like your super wacked out sister?”
“She’s not … wacked out.”
Rachel is my best friend, but she’s not a fan of my sister, Juliet. In fact, she pretty much despises her. My twin isn’t mean or anything, she’s just … super smart. And sometimes tends to let her geekiness fly. She can recite the first five chapters of each Harry Potter book. She knows all the lines word-for-word in every Star Wars movie. Every stinkin’ one.
Speaking of my awesome twin, she pulls up next to me and slams her Jeep door. “You did it again! You know you only have one simple chore. One. And every time I get stuck with it.”
I roll my eyes at her. “Calm down, sis. I’ll get it next time.”
She smiles wickedly at me. It’s like looking in a mirror since our physical features are almost exactly the same. The only one small difference isn’t something most people notice just from looking at our faces: she has a small birthmark on her neck just below her ear, shaped like a heart, whereas I do not. Everything else is definitely the same, from the dark, rich brown hair to the mossy-green eyes, right down to the height of a whopping 5’6”. I’ve thought about cutting my waist-length hair to my shoulders just so people can tell us apart.
“You say that every time! I’m done helping you out Layla. Maybe next time instead of rushing off to get Starbucks, see Adam, or pick up your BFF you’ll do your chores and stop putting them on me. I have a life too you know.”
Rachel cuts in. “You have a life, since when?”
“Butt out Rach.” I shift my attention back to my sister who is currently glaring at my bestie. “Juliet, I’m sorry,” I say.
Her eyes cut to me. She shakes her head and walks away. I call out, “Juliet.” She doesn’t look back. Instead, she flips me off—and okay this time —I rightly deserve it.
I totally thought she’d take out the recycling for me again. “Dang it. Mom’s going to kill me.”
“This is why your sister is a freak,” Rachel says as we head into the school. Once we’re inside, she ditches me for Austin and I head to my destination, Adam.

Author Bio:
Natalie Decker is the author of RIVAL LOVE series and the Scandalous Boys series. She loves oceans, sunsets, sand between her toes, and carefree days. Her imagination is always going, which some find odd. But she believes in seeing the world in a different light at all times. Her first passion for writing started at age twelve when she had to write a poem for English class. However, seventh grade wasn't her favorite time and books were her source of comfort. She took all college prep classes in High school, and attended the University of Akron. Although she studied Mathematics she never lost her passion for writing or her comfort in books. She's a mean cook in the kitchen, loves her family and friends and her awesome dog infinity times infinity. If she's not writing, reading, traveling, hanging out with her family and friends, then she's off having an adventure. Because Natalie believes in a saying: Your life is your own journey, so make it amazing!
Find out more visit: www.authornataliedecker.com