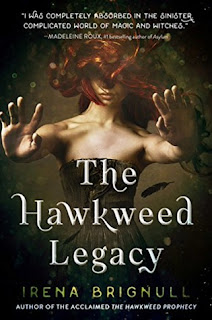 
Synopsis: Poppy is discovering a purpose for her powers in Africa, but she is haunted by a vision of her own death. Taken in by a boy and his great-grandmother, a healer, they vow to keep her safe-even if that ultimately means holding her captive. But Poppy never stops longing for Leo and, when she feels his magic begin to spark, she will do anything to be reunited with him.
Desperate to regain Poppy's trust and bring her home, Charlock embarks on a plan to reunite Leo with his mother. What Charlock doesn't foresee are the string of consequences that she sets into motion that leave Ember all alone and prey to manipulation, the clan open to attack from other witches, Sorrel vulnerable to Raven's ghost, Betony determined to protect her son from his father's fate, and which leave both Leo and Poppy in terrible danger.

My Review
The Hawkweed Legacy was breathtaking and addicting. The book was so beautiful and captivating I could not put it down.
When I read the first book in this series, I liked it but it wasn't a book I would remember a year later. It was good, but it wasn't unique and memorable. This book was so much better. The characters and story becomes a lot more relatable and it truly becomes a unique story that I will definitely remember for a long time.
This book starts off exactly where the last one ended. Poppy is flying away in bird form, leaving behind Leo, Ember, her mother and the whole clan after being crowned Queen. Once reaching Africa, she is taken in by a Shaman and her grandson, who vow to help her and keep her safe. As Charlock does everything to ensure her daughter will return and be safe when she does, she sets up a plan to use Leo to get Poppy to come back, which makes a huge mess not only in the main characters, but also in the coven itself.
The beginning of this book was a bit dry. We get a lot of backstory to when Charlock was a teenager and she and her best friend Betony finally became of age to go out into the real world to try to get pregnant. The main point of the story is the friendship between Betony and Charlock and how Betony fell in love with a boy and how that put strain on the two friends. While this part of the story was interesting, it was a bit boring. The whole time I was just waiting to read more from Poppy's point of view in Africa since it was a whole new setting, but unfortunately there was very little we go from her whole trip.
The book was a bit predictable, especially since you already know how young Betony and Charlock's story ends. The climax of this story did catch me by surprise a bit, but I really enjoyed it, as well as the ending.
I loved Poppy in this story just as much as I loved her in the first book. I was a bit disappointed with Ember's story. Yes she's human and she's not the powerful Queen like Poppy, but that doesn't mean you have to make a weak idiot in the story. It almost seemed like Ember lost all her drive and her character from the first book and become someone else.
Overall, I really enjoyed this book so much more than the first. The main characters (minus Ember) were all amazing, and the plot line was fairly good. Other than Ember's character, and the story being a little to predictable, I truly enjoyed this story. Can't wait to see how this series continues.
Happy Reading,
Aneta
Posted by Aneta at 1:00 AM