The Iron Traitor by Julie Kagawa 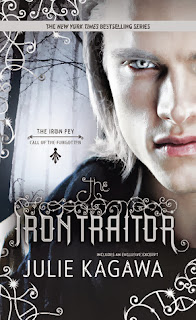 Goodreads Summary: In the real world, when you vanish into thin air for a week, people tend to notice.

After his unexpected journey into the lands of the fey, Ethan Chase just wants to get back to normal. Well, as "normal" as you can be when you see faeries every day of your life. Suddenly the former loner with the bad reputation has someone to try for-his girlfriend, Kenzie. Never mind that he's forbidden to see her again.

But when your name is Ethan Chase and your sister is one of the most powerful faeries in the Nevernever, "normal" simply isn't to be. For Ethan's nephew, Keirran, is missing, and may be on the verge of doing something unthinkable in the name of saving his own love. Something that will fracture the human and faery worlds forever, and give rise to the dangerous fey known as the Forgotten. As Ethan's and Keirran's fates entwine and Keirran slips further into darkness, Ethan's next choice may decide the fate of them all.

My Review: There are no words to explain how awesome Julie's writing is. She could be writing about killing your mom and you'd still think it was pure genius!
In the second book of the Call of the Forgotten series, we begin right after the ending of the last book. All Ethan wants to do is try to win the approval of Kenzie's father, take her out on a normal date, and just try to get away from the Nevernever and the Fey. But when Meghan shows up at his house, claiming that Kierran has ran away and no one has seen him. Well lets just say, things don't stay normal for long in Ethan's world.I am so amazed by Julie's writing. I've loved her since I read the Iron King, but this time, she really took it to a whole new level. Having said that, this book was so amazing. It is just as good as all the other books that have come before it. I don't want to give too much away, because I really don't want to ruin the amazing cliff-hanger ending..I really love Ethan and Kinzie's relationship, after reading books like Insurgent by Veronica Roth, where the characters in a relationship always fight, bicker, and go behind each others backs. Their relationship just seems perfect, obviously they fight and stuff but they're just more normal.I honestly can't tell you how much I loved this book. I definitely screamed a few times (in both happiness, anger and surprise) and I may have cried a little at the ending. But it was all so worth it.Happy Reading!Love Aneta
Posted by Aneta at 9:26 PM