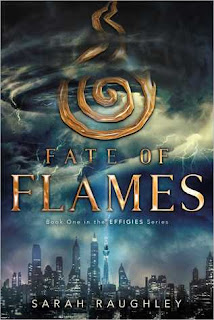 Synopsis: Years ago, everything changed. Phantoms, massive beasts of nightmare, began terrorizing the world. At the same time four girls, the Effigies, appeared, each with the unique power to control a classical element. Since then, they have protected the world from the Phantoms. At the death of one Effigy, another is chosen, pulled from her normal life into the never-ending battle.

When Maia unexpectedly becomes the next Fire Effigy, she resists her new calling. A quiet girl with few friends and almost no family, she was much happier to admire the Effigies from afar. Never did she imagine having to master her ability to control fire, to protect innocent citizens from the Phantoms, or to try bringing together the other three Effigies.

But with the arrival of the mysterious Saul—a man who seems to be able to control the Phantoms using the same cosmic power previously only granted to four girls at a time—Maia and the other Effigies must learn to work together in a world where their celebrity is more important than their heroism.

But the secrets Saul has, and the power he possesses, might be more than even they can handle…

My Review
Fate of Flames is my new favourite dystopian book. It has amazing characters, a fantastic plot, and a stunning new world. The book has so much action, you won’t want to put it down.There can only be four Effigies at one time. If one Effigie dies, their power moves on to the next person chosen. When Natalya turns up dead, it is Maia Finley who becomes her successor. The power of fire has been handed to Maia, she has no choice but to train her powers and fight alongside Bella, Chae Rin, and Lake to defeat Phantoms terrorizing the whole world. There comes a book every once in a while, that you wish you read when the whole series came out because you’re dying to read the next one after finishing the first book. This is that series. I was not exaggerating when I said in the beginning that I could not put the book down. As for the moments when I had to put the book down, all I could do was think about getting back to it and continuing reading. I absolutely loved Maia as the main character. She is such a good person, and always knows when to do the right thing. I love how she is very careful and doesn't trust anyone. She makes things exciting, and I can promise you that you will not get bored of her point of view. Throughout the book I found myself falling in love with the other Effigie girls as well. Right off the bat, I thought Belle and Lake were going to be horrible to read about, they both seemed like stuck up annoying girls, but once you find out more about them you really do end up liking them and cheering on the whole squad of Effigies. Chae Rin was definitely my favourite out of the four, she's not afraid to tell people how it is, and do her own thing, and its definitely a plus how she's from Canada. The world building is outstanding. I believe it is the best world building I have yet to read about. Not only do you get to see Maia’s home town, but the squad of girls also travels to places like London, Paris, Argentina and many others. It’s so wonderful to read about people travelling rather than staying in the one city or country.The one thing I didn't like about the book, was the romance. On one hand, if you could call it a romance, it really sucked. I could not ship the characters which was something I really wanted to do, but I just couldn’t. But on the other hand, it really made Maia and the girls more warrior-like and inspirational. I can’t describe it really well, but you’ll know what I mean if you read the book.Overall, I’m so impressed with this book that I have to give it a 5 star. Honestly I would give it 6 stars if it was possible. I highly recommend this book to all dystopian and kick-ass female main character lovers. Definitely give this book a try, I’ll just be over here, dying and waiting for the next book to come out.Happy Reading- Aneta
Posted by Aneta at 3:00 AM