Review: The Descendant of Destiny by Marion Hill 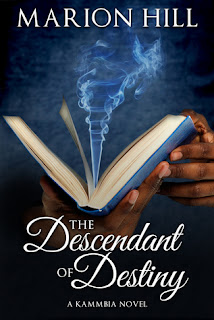 Synopsis: Do you have to believe in destiny... to fulfill your own?

Diondray Azur never questioned his regular life. But everything changes when he learns that the true history of his family and his world isn't what he was taught. When he hears of the Book of Kammbi and its ancient prophecy, he sets out on a quest for the truth.

Diondray doubts the prophecy, which says it can only be fulfilled by the descendent of a great leader. As the challenges on his journey mount, all signs point to him as the one with a prophetic destiny.

He'll stop at nothing for the truth, but what will happen when he finds it?

The Descendant of Destiny is a fantasy novel with spiritual overtones. If you like rich new worlds, introspective characters, and thoughtful social commentary, then you'll love the first book in the United Kammbia series from Marion Hill.

My Review
The Descendent of Destiny is a story of the spiritual journey of Diondray Azur. Born into the rich family, Diondray chooses to live among the poor and stay away from his snobby family. It isn't until he learns of his family history that he realized that his family has lied to him all these years, and that he is part of a prophecy that could unite the land together. After being thrown into jail for speaking the truth, Diondray receives help, and find himself on an adventure, not only to fulfil his prophecy but to find himself along the way.
While I was blown away by the world building, character building and idea of the story, there was no action or good plot line to keep me engaged in the story. Unfortunately I found myself putting the book down a lot, and having to force myself to finish it.
The main character, Diondrey, is very likeable. He is down to earth and humble. We watch him develop from a naive boy to a strong man who knows who he is and is ready to take on the world.
The world-building takes us through two cities, described in magnificent detail. We also get a hint of other cities that Diondray will visit in the future books. The world that Marion Hill created is wonderful and well thought out. The descriptions are amazing, and really help you visualize the world you're reading about.
The plot line of this story is basically a flat line. We see a little bit of action when Diondray is thrown in jail. I believed this would be the part where the story pick up but it remained at a constant level throughout the rest of the book. There is rising action to an event, but no big event takes place, so by the time you get to the end you kind of have a feeling of "That's it?"
The book is very short and fast paced, its a quick and easy read, perfect for a bus ride or a road trip.
Overall, I don't think I would recommend this book to anyone. I hope that the future books in this series are more engaging.
Happy Reading,
Aneta
Posted by Aneta at 2:00 AM