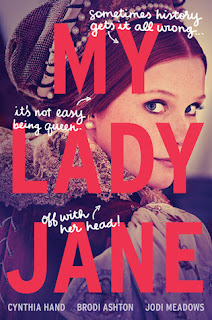 Synopsis: The comical, fantastical, romantical, (not) entirely true story of Lady Jane Grey. In My Lady Jane, coauthors Cynthia Hand, Brodi Ashton, and Jodi Meadows have created a one-of-a-kind fantasy in the tradition of The Princess Bride, featuring a reluctant king, an even more reluctant queen, a noble steed, and only a passing resemblance to actual history—because sometimes history needs a little help.

At sixteen, Lady Jane Grey is about to be married off to a stranger and caught up in a conspiracy to rob her cousin, King Edward, of his throne. But those trifling problems aren’t for Jane to worry about. Jane is about to become the Queen of England.

My Review
A beautifully written novel by some of the best authors. This book will not let you down.
My Lady Jane features the story of three main characters, a dying King Edward, Lady Jane who is set to become the next Queen and Guildford Dudley, the man Jane has been forced to marry. With a fantastic addition of magic to classic history, this book easily became one of my favourites.
I fell in love with Jane right from the beginning, she is so intelligent and determined, any book lover will fall in love with her immediately. Throughout the book, we see her open up to people, go out of her comfort zone and become a truly amazing character. I also really liked Guildford, her was entertaining and hilarious right from the beginning. I wasn't a huge fan of Edward in the beginning. He was whiny and kind of annoying. He was really clueless not only about his safety but also the relationships he has and what is truly going on around him. After about third of the book, his story really picks up and I really started to enjoy his point of view. His character development was really wonderful.
The world that the authors created was fantastic. The world building was great and every setting was very different yet you could picture it clearly.
These three authors created such an amazing book, not only do you get some valuable history lessons, but it also contains breathtaking fantasy ensuring that the reader never gets bored. Their jokes were absolutely hilarious, I found myself laughing out loud every few chapters.
Overall, I highly recommend this book to all YA fans, whether you like fantasy, historical fiction or contemporary. I'm sure you'll fall in love with this one.
Posted by Aneta at 1:00 AM