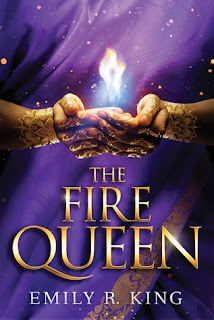 Synopsis: In the second book in The Hundredth Queen Series, Emily R. King once again follows a young warrior queen’s rise to meet her destiny in a richly imagined world of sorcery and forbidden powers.
Though the tyrant rajah she was forced to marry is dead, Kalinda’s troubles are far from over. A warlord has invaded the imperial city, and now she’s in exile. But she isn’t alone. Kalinda has the allegiance of Captain Deven Naik, her guard and beloved, imprisoned for treason and stripped of command. With the empire at war, their best hope is to find Prince Ashwin, the rajah’s son, who has promised Deven’s freedom on one condition: that Kalinda will fight and defeat three formidable opponents.But as Kalinda’s tournament strengths are once again challenged, so too is her relationship with Deven. While Deven fears her powers, Ashwin reveres them—as well as the courageous woman who wields them. Kalinda comes to regard Ashwin as the only man who can repair a warring world and finds herself torn between her allegiance to Deven and a newly found respect for the young prince.With both the responsibility to protect her people and the fate of those she loves weighing heavily upon her, Kalinda is forced again to compete. She must test the limits of her fire powers and her hard-won wisdom. But will that be enough to unite the empire without sacrificing all she holds dear?

My Review
The Fire Queen was an amazing sequel! If you liked the first book, you will love this one even more.Kalinda is on the run. Running for their safety, Kalinda and her allies must find Prince Ashwin and help him reach his throne before his whole empire falls. Ashwin needs help defeating his enemies, and the only way to ensure assistance to get his throne back, is for him to marry. Kalinda must battle 3 other women, and the winner will marry the prince. Even though Kalinda loves Deven, her love for her friends and her people forces her to compete.I really liked Kalinda in the first book, but I loved her so much more in this one. In the first book, she went from being the underdog to a powerful woman, and I loved reading about that. In this book she's already powerful, but now she has to battle a darkness inside her, and she has to face doing the right thing or being selfish. I think Kalinda is a great character, any woman can look up to her.The plot of this story was definitely a lot more interesting. I found that the first book was little bit predictable in the plot, but this one was definitely a nice surprise. There were still some aspects that were predictable (like how Kalinda does in the tournament) but the ending wasn't exactly what I expected, it was a pleasant surprise. The romance in this book was alright. It sort of has that second book syndrome regarding the romance, where in the first book the characters fall in love and everything is great, but in the second book they have some problem and it keeps them away from each other, only to work it out in the end. Well that was exactly what happened here, Deven feels ashamed for being a traitor and doesn't feel like he deserves Kalinda, his standoffish nature makes Kalinda think that he is upset with her and it just causes tension in their relationship. In comes the new "suitor" and the love-triangle begins. While the love triangle is still present, it is quite obvious who Kalinda will chose in the end.Overall, the plot and the story were so much better in this book, as well as Kalinda's development. I found myself surprised at the ending, which was really good. I loved everything about the book, except the love triangle, it just seemed really pointless to me. I would still recommend this series to anyone who loves fantasy, and the people who have read The Bone Witch or The Wrath and the Dawn.Happy Reading,Aneta
Posted by Aneta at 1:00 AM