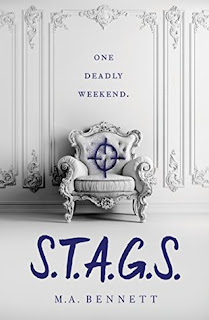 At St. Aidan the Great School, or S.T.A.G.S., new things--and new people--are to be avoided. Unfortunately, Greer MacDonald, token scholarship student, is very much a new person. She has just transferred to S.T.A.G.S., and finds herself ignored at best and mocked at worst by the school's most admired circle of friends, the Medievals.

So imagine Greer's surprise when this very group invites her to an exclusive weekend retreat at the private estate of the parents of their unofficial leader, Henry de Warlencourt. It's billed as a weekend of "huntin' shootin' fishin'," and rumor has it that the invitee who most impresses the group will be given the privilege of becoming a Medieval themselves.

As the weekend begins to take shape, however, it becomes apparent that beyond the luxurious trappings--the fancy clothes the maid lays out on Greer's bed, the elaborate multicourse dinners held in the Great Hall--there are predators lurking, and they're out for blood. . . .

My Review
I thought I was really going to enjoy S.T.A.G.S. but I was just left very disappointed from beginning to end. First of all, the book starts off in past-tense from the main character, Greer's point of view. In the beginning, she mentions that a certain individual was killed and that she and a few others were the murderers, then she dives into the story from how she got to the school. Normally this type of thing works really well in mystery novels, where they reveal the killer in the beginning but then start the story and theres always some type of crazy plot twist. Yet this book didn't really have a plot twist, and I honestly think it revealed way too much at the beginning. It left me bored and not wanting to read the book, since I already knew what was going to happen.The main character Greer, was alright in the beginning, but eventually I just ended up not liking her at all. She talks about how she's different, and she wants to be herself rather than worshiping the medievals and being just like them, but throughout her trip she slowly starts becoming more and more like them, obviously not the rich part, but the snobby, I think I'm better than everyone, evil kind of way. It honestly felt like her character development was going backwards, rather than forwards.The romance in this book was absolutely horrible! In the beginning of the book, Greer mentions how much she dislikes Henry and the other medievals, but of course she ends up falling for him and his tricks the first moment he shows her any type of affection. Greer was described as a smart girl in this book, but man was she dumb for falling for this guy. Then of course she is so blinded by her love for Henry after he calls her beautiful once, that she can't even see that there is someone who actually likes her for real, until he says it out loud. Even then, it was kind of like where the heck did this come from? It was just not written very well.The writing was alright, but wasn't the best either. If the book didn't do the "mystery" aspect of revealing that someone dies in the end, the action would have been really good. But of course since it was spoiled, it wasn't the best. The world-building was good, there were lots of good descriptions of the school and the mansion and all the land it contained. The reason why I'm giving this book two stars instead of one, is because of the ending. I found it absolutely hilarious, even though it wasn't meant to be funny at all. So in the end, Greer realized the mistake she made in trusting someone, who ended up being the "most evil" person in the book. I think this was supposed to be a "plot twist" but you could see it from a mile away!! In this moment, Greer was actually shook when she realized what was really going on, and I thought her stupidity was the funniest thing ever. For an elite school for super smart kids, you'd think they'd figure this stuff out.Overall, I would not call this book a thriller or mystery at all. Although it was definitely not the book for me, if you've read previous books that sound like this and want to give them a try, then I'd say go for it, but if you find yourself bored in the beginning like I was, just give up. Thank you to Netgalley and the publisher for providing a copy of this book, in exchange for an honest review.
Posted by Aneta at 1:00 AM