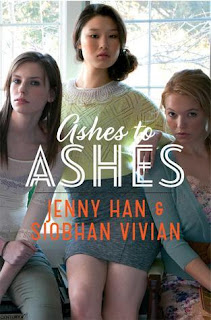 Synopsis: New Year's Eve ended with a bang and Mary, Kat and Lillia may not be prepared for what is to come.
After Rennie's death, Kat and Lillia try to put the pieces together of what happened to her. They both blame themselves. If Lillia hadn't left with Reeve... If Kat had only stayed with Rennie... Things could have been different. Now they will never be the same.
Only Mary knows the truth about that night. About what she is. She also knows the truth about Lillia and Reeve falling in love, about Reeve being happy when all he deserves is misery, just like the misery he caused her. Now their childish attempts at revenge are a thing of the past and Mary is out for blood. Will she leave anything in her wake or will all that remain be ashes?

My Review
“Life is long if you let it be.”
WARNING. SPOILERS AHEAD
This isn't the first time I've read a series by Jenny Han. My problem with her books is that one book in the series will be so amazing that I can't stop reading, and different book in the same series will be so horrible I vow to never read her work again.
Let me explain what I mean by that.
The first book in this series was alright. It was really cute and I liked the characters, but it was a tad predictable, and I thought the "paranormal" aspect was stupid.
The second book knocked my socks off. I fell in love with the character even more, the plot line was so crazy that I couldn't stop reading, and the "paranormal" aspect had me yelling "WHY DIDN'T I SEE THAT COMING. So overall it was amazing.
Now the third/last book. The beginning was good, then in the middle you're patiently waiting for the action to start... and then it happens and its over in the blink of an eye. And once you read the epilogue, you go "WAIT WHAT? NO! This is so stupid."
The whole book was leading up to this ultimate battle between Kat and Lillia vs. Mary who is trying to kill Reeve. Now since Mary is a psychotic ghost you'd expect the battle to be crazy right? No, I swear it lasted like 10 pages and it was basically Mary going "Yay I've finally got you" and then "Oh wait, maybe I don't want to do this." and then "I'll save your lives instead" WHAT?
Now before I start talking about the ending, let me tell you what I was hoping would happen. There is an epic battle between Mary vs. Lillia, Kat and Reeve. The three of them are no match for Mary and just as they're about to die, Rennie's ghost appears and she says something like "These are my friends, I have known them for years and even tho I wasn't deserving of their love, they always loved me." and then it would be a Mary vs. Rennie battle where Rennie would win, go to heaven after making amends with her friends. Reeve and Lillia would be together, and Kat would go to Oberlin and become super smart and successful in the future.
The thing is, the part about Rennie's ghost was totally introduced in the story. In one of Kat's dreams, Rennie appears (just how Mary is doing) and right before Rennie disappears and Mary appears in the dream, Rennie says something like "Man I really hate this girl." Mary was the one who killed Rennie, so Rennie taking her revenge and saving her friends from Mary would have been the ultimate ending where she redeems herself. It could have been so beautiful.
Now lets talk about that ending. In the epilogue, Reeve and Lillia go their separate ways without ever talking again. First of all, you guys just fought a ghost, how do you not talk about that? Second of all, the romance the two characters shared was really intense and powerful, how does one walk away from that so easily, especially now that the one thing keeping you apart was gone and you could finally be together forever.
Then Lilia says this
“I remember what it felt like to fall in love for the first time. You think you’ll never love like that again. But you do.”
Girl, I totally understand you. We have all loved and lost, no one forgets their first loves, and people do move on in their lives. It's natural and it happens all the time. But right after Lillia says this quote, we find out that she ends up with Alex... YOU HEARD RIGHT. ALEX. AKA THE FRIENDZONED GUY THROUGHOUT ALL 3 BOOKS, THE DUDE SHE NEVER HAD A SPARK WITH, EVER. What pisses me off the most tho, is that Lillia was Alex's first love. So she's basically a hypocrite for the quote I listed above. I would have been perfectly fine if she fell in love with someone completely new that we haven't encountered in the books, but just the fact that it was Alex makes me really salty.
Then theres Kat's ending. She never goes to Oberlin, which I was a little upset about because I was cheering her on, but its alright. She went to school the next semester and did good. BUT THATS ALL WE HEAR. Then we hear about how her dad dies and everyone comes back for a funeral, WHERE KAT AND LILLIA DONT EVEN TALK... What happened to their friendship? You don't kill a ghost with someone and then go your separate ways, that stuff brings people together. I wish Kat had a way better ending.
This book could have had such a wonderful ending. Unfortunately the authors ruined it completely. Not only did the book feel rushed since the main action was only a few pages long, but they also ruined the beautiful romance Reeve and Lillia, and made her settle for Alex which just feels wrong. And Kat had a quick sentence of an ending. Honestly, I kind of wish that I never started this series, because then I wouldn't feel the disappointment of this last book. I don't think I'll pick up another series by these two. Enough is enough.
Posted by Aneta at 1:00 AM