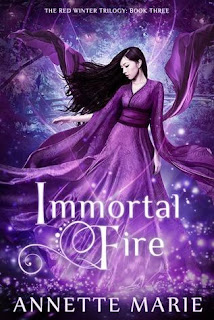 Synopsis: Once, Emi believed the heavenly gods were righteous and wise, while the earthly yokai spirits were bloodthirsty and evil. But with a traitorous deity poised to destroy her world, and the yokaistanding as humanity's only defense, the lies of her upbringing have toppled to reveal a far more terrifying reality.
Despite the looming threat, Emi can't escape her greatest distraction: Shiro, the fox yokai who has so deftly claimed her heart for his own. Soon—too soon—she will have to break the curse that binds his magic and memories. And once the ancient power inside him awakens, the yokai she loves will be changed forever.
As the earthly gods gather to wage war against the heavens, Emi and Shiro must gamble everything to turn the tide against their immortal, all-powerful foes. Together, they will find a way to save her world—even if it means losing each other.

My Review
This has to be one of my favourite series ever. I wish more people knew about it becauase it truly is breathtaking.
Isanami is about to descend, and its up to Emi to stop her from destroying the Earth. As the day of Emi’s death comes closer, her love for Shiro only grows, will she be able to take the final beads of the Onenju off and release Shiro’s true form? It could mean winning the war, but losing Shiro for good.
I have grown to love Emi with all my heart. I have read countless books, and to this day she has gone through the best character development in my opinion. Going from the girl who was afraid of everything and constantly whined, to a powerful warrior, who even though is technically human, was still fighting among people with crazy magical power and decades of training. Her strength and determination throughout this book was so beautiful, not only was I cheering her on the whole time, but her loyalty to her new friends and her willingness to sacrifice herself to save their lives was just amazing to read about. She had me crying in one moment and cheering her on in the next.
The romance! You guys already know how much I love Shiro, but in this books I was definitely wanting their relationship to work out (even though I want Shiro for myself). It’s truly wonderful to see how much they love one another, and how much they help each other become better people.
The action in this book was on point! There were slow moments and there were fast moments, but they all played such important parts in the story that there was no part of the book where I was bored. I just sat there and kept reading, it was just too good to put down.
What I loved in this story was the ending. Everyone has an idea of how the ending will go down, but Annette created a wonderful twist that will leave the reader surprised, but also happy. I loved the way the story ended, it definitely hit all the important points and answered all the questions the reader has.
Overall, I’m extremely sad that this series is over. Highly recommend it to all fantasy and forbidden romance types. I am definitely looking forward to reading more from this author.
Happy Reading,
Aneta
Posted by Aneta at 1:00 AM