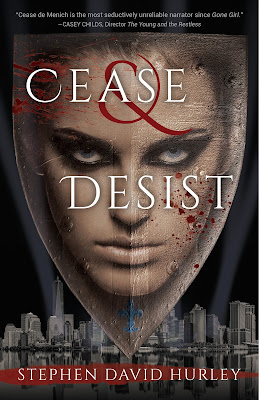 Synopsis: What if the secret to being charismatic were actually a gene you could inherit, and pass along to your children. What if this "X-factor" could make you a star? Welcome to the world of Cease de Menich, a sixteen-year-old actress in New York City who gets cast as Joan-of-Arc in a reality-drama, only to discover her "acting gift" has been passed down through her bloodline for almost six-hundred-years. Cease finds the plot of the drama reveals dark secrets from her past--an abusive mother, a brother who committed suicide--and the reader must decide if she's a reliable narrator or a terrified girl who's succumb to the pressure of fame and the abuse of her past.
Cease & Desist is a dark, contemporary YA thriller with a supernatural twist. Readers of books like I Let You Go and The Girl on the Train will enjoy this coming-of-age story, which struggles with the realities of sexuality, violence as entertainment, and mental illness. Cease & Desist has excellent crossover potential into the adult marketplace.

I'm Cease de Menich. It's OK if you don't know me—but you will. That's what my agent
keeps telling me to tell people, and judging from the throng of mostly stage-moms waiting
beneath a marquee that reads “Good Morning, New York City,” maybe he's right. I'm the actress
who plays Jeanne d'Arc (please don't call her Joan; that was never her name) the virgin, the
warrior, the Catholic saint in a reality show that's going to be a blockbuster. I'm supposed to say
that, too. But don't worry, I'm not over-the-top full of myself the way the others in the final three
are.
I'm not beautiful, for starters. I've got a big nose—a French nose, as my Aunt Nana
insists—but if it weren't for my wide-set eyes it would be a real honker. I want to have it fixed
but my Nana won’t let me. She says it gives me character. But the real reason is that we haven’t
got the money, so that's another thing you don't have to worry about. I'm not rich, not like the
girls from the Upper East Side who sat beside me at Juilliard. What I am is tough and smart, and
I have something all the unrich, unbeautiful girls have: I have absolutely nothing to lose.
I look out the window of the car as I take off the last of my body armor; at the faded
crepe in a liquor store window—the long shadows lumbering over subway grates on
Broadway—and back to the faces of the wannabes waiting in the cold. All those wet noses and
eager looks—all those eager fingers I hope will soon be pressing the letters of my name into their
home screens. It’s only been four months since I was standing outside in the cold—an unknown,
a wannabe, just licking my lips hoping to sink my teeth into a plum role.
For all you people who’ve been watching me on the WebTV trailers, I know what you’re
thinking—that I just got lucky. I don’t deserve to be here. And you know what? I think that, too.
(Is there an unrich, unbeautiful, sixteen-year-old girl anywhere who wouldn’t think that?) But
fame never landed on my doorstep like a perfectly wrapped gift. I’ve paid my dues in ways
you’ll never know… and for those of you who’ve been watching the installments the producers
have been showing on WebTV every night—and are wondering just what this show is, I can offer
you an explanation in a few simple steps.
First. This isn’t just a reality show; in other words, this isn’t just a show about a bunch of
girls and boys who fall in love or beat each other to death—it’s a drama. I’m an actress playing
an historic character who lived almost six hundred years ago. Try to think of my character,
Jeanne d’Arc, as a real-life superhero, because she was. The three finalists who must compete for
the boys are Jeanne d’Arc, Catherine the Great, and Susan B. Anthony. The boys do not play
historic characters—they’re just hunks who flex their pecs and preen a lot. You probably know
by now, that the conflicts we face are pretty modern—as in, things that girls and boys must face
every day at home and school.
Second. The plotlines of each episode are closely guarded secrets. Dialogue is released
the night before we shoot, and I’m given only my lines and a brief outline of the action. There
were rumors in the beginning that actors would bribe the writers to get their lines early or to find
out what was being written about the other characters. I don’t doubt it.
Third. Francis MacDonald, the director, is crazy—hopefully crazy the way that
Hollywood geniuses are—an auteur, I try to convince Nana, but she keeps insisting he’s an
imbecile.
I comb my fingers through my hair and need another minute before I get out of the car.
I’m tired. Before arriving here I was locked in a straw-filled cage for three hours, and now I’d
rather be back home in Tudor City with my Nana having my brownies and milk because even a
martyr about to be burned at the stake deserves her brownies and milk. I open the window.
“We’ve been waiting all morning,” a girl in the crowd says.
I offer up a wholesome smile.
“Sorry. I was tied up.” And I was. Tied to a stake, in fact, just after the interrogators in
Rheims, France (actually it was the Kaufman-Astoria Studios in Queens) grilled me, Jeanne
d’Arc, about the voices I heard from angels and why I chose to wear men’s clothing.
A woman tugs the arm of her girl, maybe eight, with a crooked smile, braces, and black
rimmed glasses with unfashionably large frames. “She’d make a great angel, don’t ja think?”
I know why they’ve come. All those eager faces. All those Louis Vuitton dreams. They
want to know how I made it. What it feels like, rising so quickly at such a tender age. What the
ingredients are in the potion that raised me up over all the others.
The it-ness of fame.
Be careful what you wish for, is what I should tell them, tell all of you. Fame tastes like
a kiss from a stranger—a really hot guy who’s got a dark side you’d better see before it’s too late.
Fame will make you do the most horrible things to the people you love. It feels like a bolt of
grief in my chest, a lock I’ve felt since the first day I arrived on the set.

About the Author
Stephen David Hurley teaches middle school and blogs about fiction, faith and young people. You can find his blog at—you guessed it—fictionfaithandyoungpeople.com 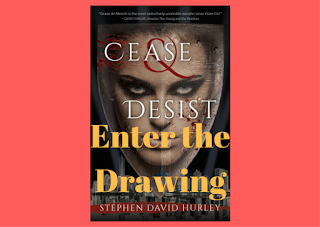 a Rafflecopter giveaway
Posted by Aneta at 3:30 AM