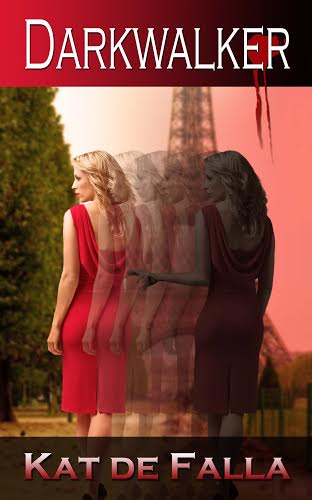 Synopsis:
For years, Seamus Bran has been a hermit in a small English town. But when two seers arrive from America seeking the cup of salvation his family has hidden for over two centuries, Seamus must decide whether to protect his blood line or save a woman he's never met.

Adrienne Perdu is a wealthy orphan living in Paris. She has no idea the weekly meetings she attends are a group of Darkwalkers, pulling humanity in the selfless dredges of soullessness. But Seamus changes everything with a kiss. The illusion of her life is shattered when her eyes are opened to the world as it really is, with angels and demons walking among us.

At Mont Saint-Michel, a rocky inlet in Normandy, France the demons attack trying to gain possession of the Cup of Salvation. As Adrienne and Seamus grow closer, the danger of the ancient war between good and evil crescendos to envelop angels, demons, and seers alike. Will Seamus be able to save the woman he now loves and his family's prize possession?

Kat was born and raised in Milwaukee, Wisconsin where she learned to roller skate, ride a banana seat bike, and love Shakespeare. She holds a Doctor of Pharmacy degree and is happily employed as a retail pharmacist. She is married to her soul mate, composer Lee de Falla and raising four kids together ala the Brady Bunch. The Seer's Lover was Kat's first book and she is working feverishly on four different series at the moment!