Review: The Speaker by Andi O'Connor 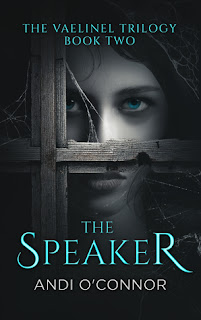 Synopsis: The Vaelinel Trilogy continues with this absorbing sequel to Silevethiel!
Alone and hunted by the Drulaack, Irewen takes advantage of her only option for survival: walking among the dead.But her refuge doesn't last long. Driven out of their hosts by Laegon, a handful Drulaack have returned to the Spirit World. No longer having the protection of the dead, Irewen is forced to return to Vaelinel.​Finally reunited with her companions, the burdens placed on them are taking their toll. Thoughts of suicide and mistrust plague the company. Slowly unravelling, they must conquer their personal battles before standing against the evil threatening the land.​For the Corrupter thirsts for revenge. And he'll stop at nothing to satisfy his hunger.

My Review
“We’ve made it this far. Together, we’ll find a way.” The Speaker is the perfect sequel to Silevethiel. There is action from beginning to end that keeps you on your toes, and the characters just become more lovable than ever.The Speaker starts up right where Silevethiel left off. Irewen is on her way to Lundvelle in hopes of reading the prophecy in the archives. The Drulaack are almost to Irewen, her only hope is to follow her parents into the spirit world to walk among the dead. Severing her link with Silevethiel, the dame and Laegon lead a party to try to find the princess, in hopes that she is still alive.From the beginning of the fist book I fell in love with both Irewen and Laegon. They’re both amazing characters and I loved the love and passion they share not only for each other but for their people and guardians as well. There was a lot of character development for both of them in this book, Irewen is trying to fight the pressure she's feeling of being a leader and having to fight, which is not what she was raised to do by her father while Laegon has to face his inner demons and doubts of not being good enough.The world building was a thousand times better than the first book. Now on the road with Irewen and the group, we not only get to see the side of the wood elves and humans, but we also get to see light elves and even a sea elf. We see new cities, new groups of people and an inside look at whats happening back in Irewens city.I was amazed that this book did not suffer from the second book syndrome. I was so worried that there was going to be less action and the characters will have changed, but I was completely wrong. Not only was there just as much action, but the characters were just the same, and sometimes even better.I am absolutely in love with this series. I still highly recommend this series to all fantasy lovers, especially fans of Lord of the Rings. Definitely give the first book a try, I’m sure you will love it.I’m desperately waiting for the third book in this series. Hopefully the wait doesn't kill me.Happy Reading,- Aneta
Posted by Aneta at 4:00 AM