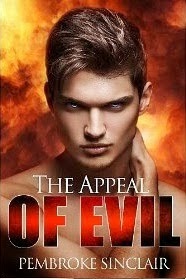 Goodreads Summary: Katie wants to invest her heart and soul in love, but she may lose both to Hell.
Katie, a senior in high school, is torn between loving the “good” guy, her childhood friend Wes who makes promises he doesn’t keep and abandons her when she needs him the most, and the “bad” guy, the new kid at school Josh who is also a real demon from Hell. Katie wants someone who pays attention to her and puts her first, but what is she willing to give up to find him? 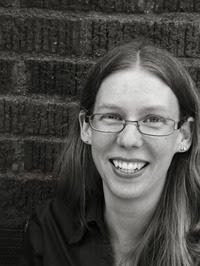 In April, I have a middle grade novel called The Ifs coming out, which will be published by Little Devil Books. I also have two picture books that will be available from eTreasures Publishing. All of the children's titles are written under the pen name J.D. Pooker. Under Pembroke Sinclair, I also have an adult urban fantasy novel entitled Wucaii that will be published by MuseItUp Publishing.

Under my real name, Jessica Robinson, from March 2008 to January 2011, I wrote scientific articles for Western Farmer-Stockman. I have a nonfiction book, Life Lessons from Slasher Films, published in July 2012 from Scarecrow Publishing (an imprint of Rowman and Littlefield).

I have my Master’s in English, and I am a freelance content editor for Musa Publishing, as well as a former content and line editor for eTreasures Publishing.

The bell rang as Katie slowly made her way to the locker room. She reached forward to grab the door handle when someone grabbed her from behind and lifted her up. A squeak of surprise escaped her lips, but no other sound came out. A hand covered her mouth. Really? Katie thought. Again? He’s going to pay for it this time. She struggled against her attacker, but his grip was too strong. He lifted her like she weighed no more than a doll. He carried her toward the gymnastic storage area and stepped over the mats until they were in the far back corner, covered in shadow.

Wes set her down but refused to take his hand of her mouth. Katie clawed and scratched at his hand and arm and attempted to kick him. Wes calmly grabbed her wrists with his free hand and pressed his body against hers so she couldn’t attack him anymore. Her face turned red and anger boiled through her veins. She screamed even though his hand was still over her mouth.

“Katie, please, calm down. I’m not going to hurt you.”

In response, she struggled against his body—a futile attempt since he was so much stronger than she was.

Wes opened his mouth to speak again, but the words never came out. Instead, a familiar, “Again?” echoed through the storage space, and Wes was pulled away from Katie. Josh had him by the back of the collar and threw him onto a pile of mats. Katie took deep breaths and moved away from the wall to get a better view.

“Why can’t you take a hint, Wes? The lady doesn’t want anything to do with you.”

Wes got to his feet and brought his fists up, ready to fight. The space was big enough that there was a few feet between the two boys, but if things escalated, Katie would be caught in the middle of the battle.

“Yeah, well, she wouldn’t want you if she knew what you really were.”

Josh threw his head back and laughed. “And what is that, Wes? A nice, clean cut boy who actually pays attention to her and wants to be around her?”

Wes’s eyes narrowed to slits. “You know exactly what I’m talking about.”

Josh clicked his tongue on the roof of his mouth. “I’m afraid I don’t. I think you may be delusional.”

Katie had her back pressed against the wall and slowly slid her way to the opening so she could run into the gym and get help. Josh was doing a great job of staying between her and Wes.

Katie glanced over Josh’s shoulder. Wes had taken his eyes off his opponent for a second and stared at her, a pleading look in his eyes. Typical, she thought. Wes always thought things were about him. Someone needed to let him know the world didn’t revolve around him. She tore her gaze from his and continued toward the exit. Wes sensed her intention and moved so he blocked the opening. He was within an arm’s length of Josh.

Josh shook his head. “C’mon, Wes. That’s not very nice. If Katie wants to leave, you should allow her to leave.”

Josh laughed. “Do what? Show her how a real boyfriend is supposed to treat her?”

Katie stopped for a second and glanced at Josh. Did he just say what she thought he said? Boyfriend? Could it really be true? Was that how he viewed their thing? Katie wasn’t exactly sure what was going on, but she was going to rethink it the next time she got the chance. If the situation hadn’t been so dire, she would have let the inner smile play across her lips.

Wes’s face crunched in anger, his fists balled at his sides. Without another word, he lunged forward. Wes and Josh fell to the ground, right at Katie’s feet. Wes sat on Josh’s chest and slammed his fist into the side of Josh’s head. Katie screamed.

She wanted to jump between the two to make him stop, but she was afraid of getting hit. The pupils in Wes’s eyes were dilated, completely blocking out the brown that was normally there. Rage shrouded his face. Fear squeezed Katie’s chest. She’d never seen him act like that before. She continued her trek toward the opening. If she couldn’t stop him, Ms. Bode would have to.

Wes brought his fist up by his shoulder to smash into Josh’s face again. As he brought it down, Josh grabbed it and stopped him. Katie stopped and watched the two of them. Josh stared at Wes, a smile curling his lips. Blood stained Josh’s teeth.

“That all you got?” With a growl and movement almost too fast for Katie to see, Josh pushed Wes.

Wes sailed across the room, through the opening, and slammed into the wall several yards away. Katie’s jaw fell open. What just happened? No one was that strong. Josh got to his feet and wiped the blood from his nose with the back of his hand. He stared at Wes, who sat on the floor, his head hanging on his chest.

Josh reached his right hand behind him, toward Katie. “C’mon. He won’t bother you for a while.”

Katie hesitated taking the offered hand. Her chest heaved with ragged breaths, her head swam with confusion. How did Josh throw Wes like that?

Josh looked over his shoulder at her. “You’re not going to get another chance. Are you coming or what?”

Katie shook herself out of her daze and grabbed Josh’s hand. The pair stepped over the mats and through the opening. They stopped in front of Wes. He looked up at them, his eyes taking a moment to focus. Katie glanced into the gym. Why wasn’t anyone else coming to help them? Surely they heard the fight, her screaming.

The door to the girl’s locker room opened in slow motion. Two of her classmates walked out, but their movement wasn’t normal. They, too, were stuck in slow motion.

“Hey!” she called to them and tried to run up to them, but Josh had a tight grip on her hand and wouldn’t let go.

“They can’t do anything to help you,” Josh said softly. “They don’t even know what’s happening.”

Katie’s breath caught in her throat. She turned back to Josh, eyes wide. “What is happening?” The words barely made it out of her mouth. Josh smiled.

“Let her go. I’m the one you want,” Wes croaked from the floor.

Josh knelt down in front of him, inadvertently pulling Katie closer since he wouldn’t let go of her hand. “You know I’m not going to do that. Besides, you never know how useful she’s actually going to be.”

Wes attempted to lunge for Josh, but his balance was off and he fell to one side. Josh laughed. Katie stared down the hall at the two girls as they headed to class. She reached for them, hoping they’d sense her desperation and turn around. Josh jerked on her hand, pulling her into his body. Her back was against his chest, and he wrapped his arm around her shoulders. His breath tickled her ear lobe.

“Take one last look, Katie. It might be the last time you see him.”

Katie stared down at Wes. He struggled to get to his feet. Pain pinched his face, along with something else. For a moment, Katie thought it looked like sadness. He reached for her. Involuntarily, she reached for him too. Then, the world was shrouded in blackness.