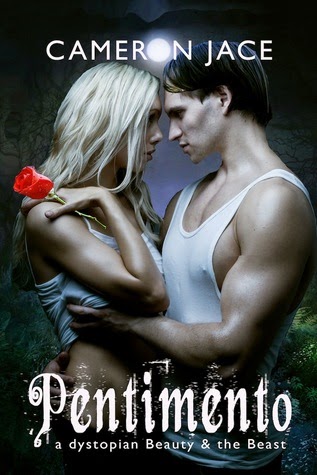 Goodreads Summary: The day Iris Beaumont turns seventeen, she is threatened to be taken by the Beasts, the rulers of the new America. After the destruction of the world, the Beasts provide citizens with whatever they need in exchange for the one teenage girl they enslave every week. They call them the Brides, and they never comes back. Iris isn’t the worrying type though; she’s been defying the system since she was ten and never cared for the Beast’s rules.
Then she meets Colton Ray, who is not like any other boy she’s ever seen. His confidence and dominance are otherworldly she can’t rationalize the attraction she feels for him. Colton had one slight problem though. It’s rumored he is one of the Beast, and Iris could be the next on the Beast’s list.

My Review: Pentimento is a artistic re-telling of Beauty and the Beast, with a Dystopian twist, perfect for all young adults.

This book is about Iris, living in a dome called the Second. Everything in this town is normal, except that its ruled by creatures called Beasts, these creatures have never been seen but they know of everyone's moves. Living with them isn't so bad, except that they take one 17 year old girl every week as a bride.
Iris has never been popular, and has never actually talked to her long time crush Colton, who is a handsome and popular guy, but when his girlfriend Eva is taken by the Beasts, Colton comes to Iris for her help in avenging his ex-girlfriend.

This book was really well written. Reading from Iris's point of view was great, I love the fact that shes not considered beautiful in her world, but its her personality that makes people fall in love with her once they get to know her. Also as for the two male characters, I definitely liked one more than the other, and I wish we got to know both of them better. Either way, the romance in this books wasn't overly great but it was alright. One thing I didn't like, was that Iris is known for her art, yet throughout the whole book we barely see her doing any artsy stuff, and usually when someone is writing from an artists point of view, they use rich words to describe the scenery and other art, but that didn't happen in this book. Also I wasn't a big fan of the ending, she said she'd do anything to protect her best friend, yet she decided it was best she leaves? Kind of confusing!

In conclusion, this was a great read, it was very fast paced with lots of things happening. But it could be improved with little details. I definitely recommend this book to fans of Beauty and the Beast and Dystopia fans. Looking forward to reading more from this author.

Thanks for reading!
- Aneta
Posted by Aneta at 2:01 PM