Of Poseidon by Anna Banks 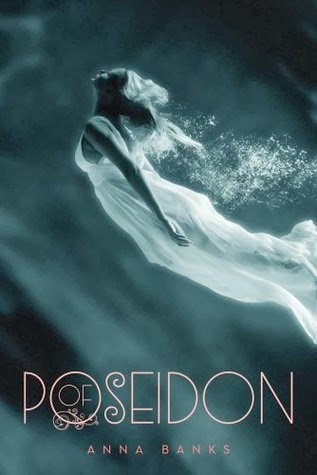 Goodreads Summary: Galen is the prince of the Syrena, sent to land to find a girl he's heard can communicate with fish. Emma is on vacation at the beach. When she runs into Galen—literally, ouch!—both teens sense a connection. But it will take several encounters, including a deadly one with a shark, for Galen to be convinced of Emma's gifts. Now, if he can only convince Emma that she holds the key to his kingdom...
Told from both Emma and Galen's points of view, here is a fish-out-of-water story that sparkles with intrigue, humor, and waves of romance.

My Review: This book was absolutely amazing! I was instantly sucked into a beautiful underwater world.

Emma is your typical shy girl, everything seems incredibly normal about her, except her eyes which are violet. Believing she is the only one, she is shocked when she accidentally bumps into Galen, not only does he have the exact same color of eyes, but she also feels a connection to him.
When Galen bumped into Emma, he believed that she was one of the Syrena, one of his kind. But staying on land is illegal. Not knowing if shes one of them or just wearing contacts, he chases after her into the water, only to discover that underwater, Emma and a shark were having a battle over her best friends body. When he witnesses Emma order away a shark, and him actually listening, he realizes that she is no ordinary human. He must find out if she is of Poseidon.

This book hooked me right from the start. This book had an exciting beginning, there was tons of action, with a hint of mystery. I loved the fantastic world that Anna Banks created in this book, we got to know Emma's world very well, and some of Galen's. I wish we got to know more of how the Syrenas live underwater. They spoke many times of home, but they never really explained how everything looks and how the Syrena live down there.

The character development was fantastic, we see Emma go from being a shy little girl who hides behind her loud friend all the time, to a more mature version that stands up for herself and others she cares about. Even though I thought of her as week in the beginning, she definitely showed her strength later on.
I absolutely love Galen, he just feels like a real man to me! He keeps his emotions well hidden, and he does everything in his will to protect his people. I love how he has a thirst for knowledge of the human world, he is just a really well rounded character, oh and hes hot too.

While Galen and Emma's romance is just heart warming and heart breaking. The romance that goes on between Rayna and Toraf is just brilliant. I must say that I actually liked it more that the main romance. Rayna and Toraf's romance is hilarious and brilliant! These two characters were by far my favorite! And they made the story line so much more interesting.

This book is just wonderful all together! It is perfect for everyone who loves fantasy, especially mermaid tales! I'm sure you will all enjoy this series.

Happy reading,
-Aneta
Posted by Aneta at 9:20 AM