The Morrow Secrets by Susan McNally 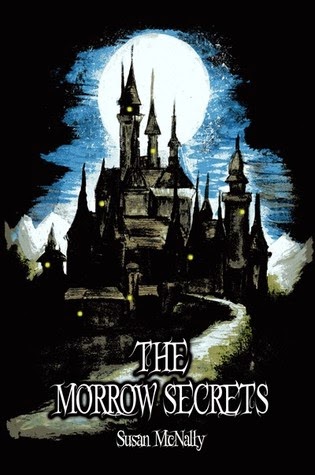 Goodreads Summary: ‘The Morrow Secrets’ is a high-fantasy gothic adventure story written for children in the 10 to 14 year age group but also enjoyed by adults who love delving into the world of mystery, suspense, imagination and make-believe. It is the first book in a series about Tallitha Mouldson, a headstrong girl caught up in the sinister web of her eccentric family, the powerful Morrow dynasty. This fantasy saga is set in an alternative world and begins in a strange, rambling house called Winderling Spires in the land of Wycham Elva. The Morrow Secrets is an epic tale of dark forces, with a beguiling mystery to be solved, an exciting yarn of deception with frightening twists and wicked turns. The story has weird, whimsical characters, some motivated by wicked intent. They lurk round corners... watching Tallitha and luring her further into the dreadful secret....
It is a story of the heroine’s fight against the evil forces that have shaped the past and still surround her present. Tallitha is determined to unearth the family secret and so begins her breath-taking adventure, exploring the forbidden floors of the bizarre old house and discovering a number of intriguing clues which lead her ever further into the heart of the mystery. During her quest, Tallitha discovers she has inherited strange paranormal powers, passed down the female line of the Morrow clan. With the help of her eccentric cousin Esmerelda, Tallitha escapes the clutches of her suffocating family and makes her way across the dangerous terrain of Wycham Elva into the wilderness and the dark world of Breedoor. Accompanied by her brother and cousins she learns more about the mysterious past of the Morrow family, she forges new allegiances, endures terrifying challenges and encounters the strange creatures of the underground kingdom. Eventually she reaches the haunting castle of Hellstone Tors and the awesome truth about her family is laid bare...

My Review: I am very grateful to have won a copy of this book from Goodreads First Reads. This book takes you on a fantastic adventure that makes you thirsty for more.
Tallitha is next in line to rule the Morrow House! But sewing, painting and other things she is forced to do just bore her. Tallitha wants adventure, she wants to go exploring and see the outside world. When Tallitha and her brother Tyaas uncover a book that belonged to a mystery Morrow that they had never heard of before, they realize that their family has some pretty big secrets, and Tallitha wont stop until she figures them out.When I first started reading, I wasn't too trilled. Even though I instantly fell in love with Tallitha and her thirst for knowledge, I was afraid that this book wouldn't have much world building, but I was completely wrong. It isn't until a quarter into the book where you actually get to explore new places along with Tallitha and Tyaas, it felt like forever, but the adventure they go on is filled with creepy places, scary creatures and dangers around every corner. Absolutely fantastic.The characters in this book were all very interesting. You already know that I like Tallitha, maybe because she reminds me of a younger version of me. I also really like her brother Tyaas, he is just like Tallitha, actually he might be even more adventurous and headstrong, trust me he wont back out of exploring anything! The characters that I had some problems with are Cissy and Benedict. I actually really liked Cissy in the beginning, she is such a sweetie, but there is one part in the book where she sells out Tallitha and Tyaas, even though she was being pressured, she didn't put up much of a fight and it made her seem really weak. Secondly, Benedict was just a pain from the start. He is really annoying, he doesn't want to do anything, and he whined pretty much throughout the whole book. Even tough I understand why the author had him in this book, I felt like it would have been more enjoyable if Benedict the party pooper wasn't with them on their adventure. But other than these two characters, there are lots of very interesting people and creatures to meet, and I'm sure you will like them much much more.This book is absolutely perfect for Teens and Pre-Teens who love the wonderful world of Fantasy. I am very excited to continue this adventure with Tallitha when the next book comes out!Happy reading everyone :)-Aneta
Posted by Aneta at 10:31 PM