Synopsis: It’s all fun and games until someone ends up undead.
Layla Petrovich has spent her whole life running away from her hometown of Hamletville. Raised by the town’s medium, and dubbed the “weird” girl for her fascination with swords, the last thing Layla wants is to go home.

But when she receives a desperate call to return just as a mysterious outbreak sweeps the country, Layla’s instincts urge her to go. Good thing, because the dead are rising.Layla, however, isn’t entirely on her own. With her psychic powers growing, surely everything will turn out okay, right?

Not so fast. Just when Layla believes she might survive the apocalypse, a sinister and ancient force rises from the shadows to finish mankind for good.Because the truth is, we were never alone in this world.
Begin The Harvesting Series with The Harvesting, Book 1. 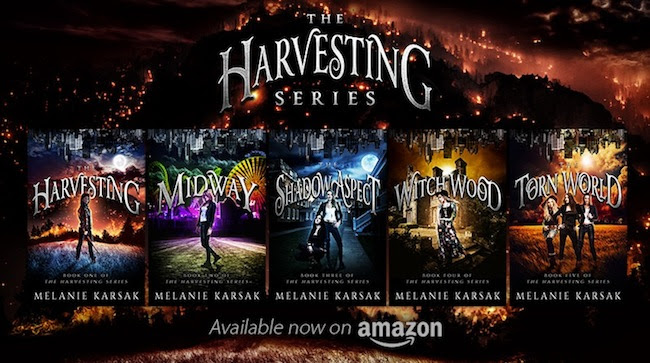 —
EXCERPT:
“If you ever need to slice someone’s head off, this is the blade you want,” I said as I lifted a curved sword off the table in front of me. “We’ve been practicing épée and foil so far, but tonight I want to introduce you to the sabre.” The practice sabre’s curved blade reflected the orange streetlight shining in through the window. A grant from the Smithsonian where I worked allowed me to teach my two passions: ancient weapons and their arts. “The sabre is a slashing weapon,” I continued and then lunged, showing the wide-eyed and excited students a few moves. “And in general, it’s my favorite,” I admitted with a grin.
The students laughed.
“Is that why you have it tattooed on your arm?” Tyler, one of my best fencers, asked.
My hand went unconsciously toward the tattoo. The ink was a sword interlaced with other once-meaningful symbols. “That’s not just any sabre,” I said, mildly embarrassed. “Here, let me show you. I brought something special tonight.” Setting the training sabre down, I lifted a rolled bundle. I laid it down on the table and unrolled it to reveal weapons in various elaborate scabbards.
“Some are épée, foils—you can tell by the hilt—a broadsword, a claymore, a katana, a scimitar, throwing daggers,” I said, pointing, “but this, this is a Russian shashka.” I pulled the shashka from the bundle. “It’s like a traditional sabre, but has no guard. She’s light, single-edged, wielded with one hand, and good for stabbing or slashing. Not awkward in close quarters like a Scottish claymore, but it will kill you just as dead,” I said with a smile. I unsheathed the weapon and gave it an under-and over-hand spin around my head, shoulders, and back.
The students grinned from ear to ear.
I put it back in its scabbard and handed the shashka to them. “Pass it around, but keep in mind it is sharp enough to cut a blade of hair in half.” I then turned my attention to Tyler. “Now, since you’re so interested, let’s see how you do with the sabre.” I tossed one of the training swords to him.
Tyler, already in his gear, jumped up and lowered his fencing mask. “But you’re not in gear,” he said.
I shrugged. “Hit me, if you can.”
We stood at the ready, made the ceremonial bow, and began. Tyler was not overly aggressive, which is partially why he was so successful. He waited for me, moving slowly. He was smart, quick, and often tried to over-tire his opponent.
I waited, dropped my sword a bit, and let him make the lunge. He took the bait.
The swords clanged together, and we clashed back and forth across the strip. He lunged and slashed while I dodged and blocked. He was fast. I was faster. When he lunged again, I ducked. With an upward movement, I went in.
“A hit,” Kasey called.
They clapped.
“Man, that’s what you get for taking on a former state champ—and the teacher,” Trey told Tyler with a laugh.
Tyler pulled off the mask and smiled at me.
Just then, my cell rang. I would usually ignore it, but something told me to answer.
“Everyone pair up and start working with the training sabers,” I said and pointed to the sword rack. I went to my bag and grabbed my cell.
Before I could say hello, she spoke.
“Layla, Grandma needs you to come home,” my grandmother’s voice, thick with Russian accent, came across through static. I was silent for a moment. My grandmother lived 500 miles away, and she never used her telephone. With the exception of her T.V., she hated technology. She’d cried and begged me to take away the microwave I’d purchased for her one Mother’s Day.
“Grandma? What’s wrong?”
“Come home now. Be here tomorrow,” she said. She hung up.
I lowered my cell and stared at it. Confused and worried, I dialed her back. The phone rang, but she did not answer. I had obligations: practice, bills to pay, groceries to buy, tons of work to do, and a date for god-sakes. But my grandmother was the only one I had left in the world.
“Sorry, guys. Emergency,” I called to my students.
Disappointed, they groaned.
“Sorry. Let’s pack it up for the night.” My hands shaking, I slid the shashka back into the bundle and rolled up the weapons. What had happened? Maybe Grandma was sick. Maybe she had some problem. Or maybe she had seen something. 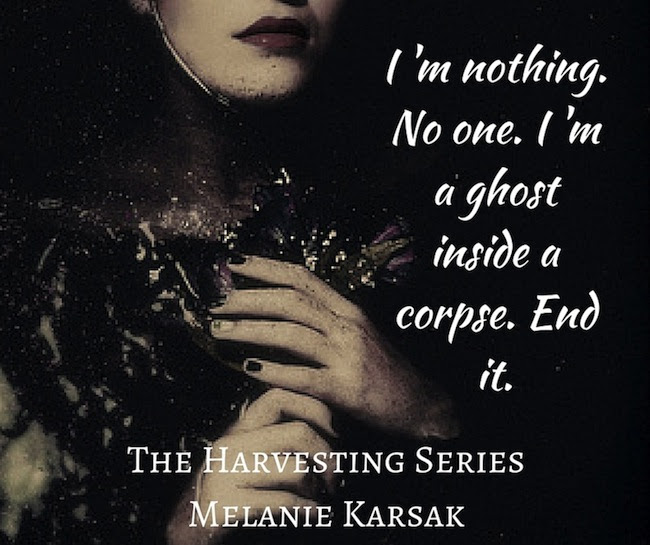 Author Bio:
Melanie Karsak is the author of The Airship Racing Chronicles, The Harvesting Series, and The Celtic Blood Series. A steampunk connoisseur, zombie whisperer, and heir to the iron throne, the author currently lives in Florida with her husband and two children. She is an Instructor of English at Eastern Florida State College.