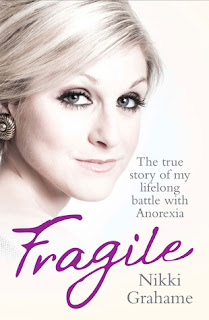 Synopsis: From the age of eight until she was nineteen, Nikki battled anorexia nervosa—but few cases have been quite as extreme as hers. At just seven years old, Nikki began feeling that she was overweight. A remark about her being fat from a fellow pupil at a gymnastics class along with insecurity brought about by her parents' separation and he beloved grandfather's death, were the catalysts for Nikki's long-term eating disorder. Aged just eight and weighing just under three stone, she was diagnosed as anorexic. For the next eight years, Nikki was in and out of institutions—seven in total—during which time she attempted suicide twice and had to be sedated up to four times a day so that she could be force-fed. At one point, she was sedated for fourteen days while doctors sewed a tube into her stomach, through which she was fed in order to get her weight out of the critical range. Nikki admits that she knew every anorexic's trick in the book: from breaking into hospital kitchens to water down full-fat milk, altering her diet sheet and switching name tags on food to ensure that she received smaller amounts, to even stuffing a door-stop down her trousers before a weigh-in. The extremes that she went to in order to avoid eating and find ways to exercise excessively shocked doctors who have worked in the field for years. As Nikki says, “I've always wanted to be the best at everything I do, so I had to be the best anorexic—and I was.” This is the heart-rending and powerful story of a girl who lost her childhood but was brave enough to finally admit that she wanted to live again.


After watching Nikki on Big Brother Canada, I fell in love with her silly nature and her freakouts. When I found out that she had written a book, I was expecting it to be a silly story or something, I never even guessed she had an eating disorder, especially a severe one.

I very rarely step out of my comfort zone and read a book like this, but I found myself curious of Nikki's history and decided to give her book a try.

This book is very well written and goes into lots of detail. Included in the book are pictures of Nikki when she was growing up, and the moments after she was released and trying to get healthy. The pictures really help you visualize how she looked exactly during her struggle with her weight, and her detail to the story makes you realize just how sick she really was.

My favourite part of the book, was once she got released. I loved reading about how different she felt and how she could never really shake her disease. Especially in the epilogue when we realize that she has checked herself in for help multiple times after her release, it just made her seem like a real person who has issues and not just the silly girl on TV.

While I do recommend this book to everyone who is interested in such a story, I would advise you not to read it if you've had eating disorders in the past or you see someone reading it who could have the potential of having an eating disorder. For the average person, we would read it and feel sad for Nikki and her past, but someone who could easily succumb to an eating disorder, I feel like this book might be a bit a challenge. The way its written is almost as if the character was bragging and challenging you to being skinnier than her (which is what Nikki was thinking at the age), so it might not be the safest read.

Hopefully you enjoy the book, and if you've watched and loved Nikki, you will definitely find her biography interesting.

Happy Reading,
Aneta
Posted by Aneta at 5:00 AM