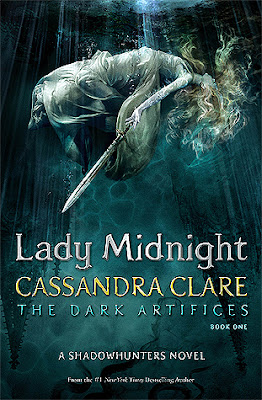 Synopsis: In a kingdom by the sea…
In a secret world where half-angel warriors are sworn to fight demons, parabatai is a sacred word.
A parabatai is your partner in battle. A parabatai is your best friend. Parabatai can be everything to each other—but they can never fall in love.
Emma Carstairs is a warrior, a Shadowhunter, and the best in her generation. She lives for battle. Shoulder to shoulder with her parabatai, Julian Blackthorn, she patrols the streets of Los Angeles, where vampires party on the Sunset Strip, and faeries—the most powerful of supernatural creatures—teeter on the edge of open war with Shadowhunters. When the bodies of humans and faeries turn up murdered in the same way Emma’s parents were when she was a child, an uneasy alliance is formed. This is Emma’s chance for revenge—and Julian’s chance to get back his brother Mark, who is being held prisoner by the faerie Courts. All Emma, Mark, and Julian have to do is solve the murders within two weeks…and before the murderer targets them.
Their search takes Emma from sea caves full of sorcery to a dark lottery where death is dispensed. And each clue she unravels uncovers more secrets. What has Julian been hiding from her all these years? Why does Shadowhunter Law forbid parabatai to fall in love? Who really killed her parents—and can she bear to know the truth?
The darkly magical world of Shadowhunters has captured the imaginations of millions of readers across the globe. Join the adventure in Lady Midnight, the long-awaited first volume of a new trilogy from Cassandra Clare.

My Review
“There was beauty in the idea of freedom, but it was an illusion. Every human heart was chained by love.”
I don't think I'll ever outgrow the shadow hunter world.
After the events of City of Heavenly Fire, Emma Carstairs has grown up in the Los Angeles Institue, alongside her parabatai Julian Blackthorn and his family. While out patrolling the streets with fellow shadow hunter Christina, the two girls find a body. Bodies of humans and fairies are being found similar markings that Emma found on her parent's bodies after the war. Emma was certain it wasn't Sebastian who murdered her parents, and the new trail of dead bodies could lead to her finding the real killer. But the mysteries of Los Angeles are more dangerous and twisted than Emma and Julian could have ever known.
I walked into this book with low expectations. Cassandra Clare has written some amazing books, but in all honesty, I didn't think she could write another fantastic book in the shadow hunter series. But I was slightly wrong.
While I do think this book was absolutely amazing, and still deserves 5 stars for the writing, it just wasn't as good as City of Bones or Clockwork Angel. With those two series, we had brand new characters and exciting settings. Yet with this release, we already knew Emma and Julian from City of Heavenly fire, and Los Angeles isn't the most creative setting to pick from.
It was wonderful to see the characters from both series again. We do get to find out what has happened to Jace and Clary as well as Tessa and Jem, as they are featured in the book multiple times. But I personally found it a tad annoying, I wanted to read about the characters from this book. It just felt like Cassy was trying to drag on the original stories way longer than they should have been. I will always stand by the quote "A good author knows when to finish a book," and I just don't think Cassy knows how.
The action and storyline of this book were absolutely amazing. Cassy threw in twists and I didn't see coming, and had me loving characters I never thought I would like.
Even though this book had such a good storyline and romance, it just felt a little bit too long. There definitely could have been parts of the book that could have been skimmed and shortened. While I don't want to think badly of the author, I'm worried she just made the book a little longer to try and make more money out of it.
Either way, it was am amazing book compared to other series. As for Cassie's books, this series isn't one of her best.
I still highly recommend giving this one a read, especially if you wanna find out what has happened to Clary, Jace, Tessa and Jem since the last book.
Happy Reading,
Aneta
Posted by Aneta at 6:00 AM