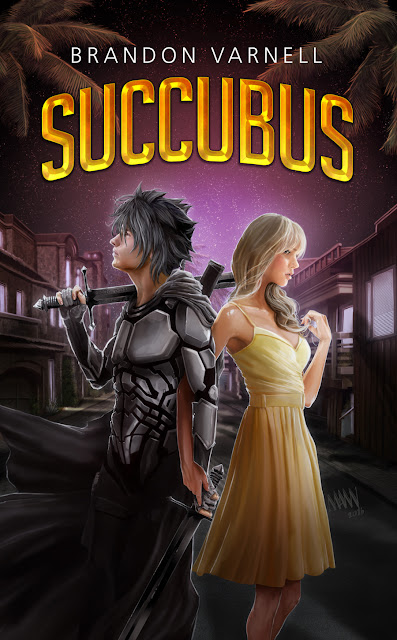 Christian is the Catholic Church’s best executioner. Dedicated. Devout. Deadly. Ever since the Church saved him from the decimated ruins of his hometown, his commitment to their cause has been unshakable.

Then he’s sent to execute Lilith, who lives in Seal Beach, California. He’s baffled. Lilith is afraid of men. The Church believes she’s a succubus, but he just can’t see it. Yet the way men—both human and monster alike—act as if they’ve been possessed whenever she’s near is disturbing.

With lustful men attacking Lilith and monsters attacking him for being near Lilith, Christian must uncover what’s really going on, and soon, or innocent blood will run through the streets—as will his own.

Love. It can kill a man.

Brandon Varnell is a writer... the end.

Brandon Varnell is the writer of the American Kitsune series. He has absolutely no skill at anything aside from writing and looking half-baked. He used to play guitar, but due to laziness, he never went anywhere with it. He also used to play a lot of video games, but after suffering this terrible affliction called book addiction, he only plays occasionally these days. Brandon lives mostly within his own imagination, but can occasionally be found in Phoenix, Arizona.

Aside from being an avid writer, Brandon also likes to cosplay. You can generally find him at the local Comicon dressed as various characters from movies, video games and anime. It's also not all that unusual to find him walking around town in a red trench coat, no shirt and carrying a large sword on his back. Kudos to those of you who get the reference. His current favorite people to cosplay are Han Solo (who doesn't want to be a roguish smuggler?), Cloud Strife (he likes the big ass sword), Dante, and Squall Leonhart. He has also thought of trying to cosplay as Darth Vader or Zero (Lelouch Lamperouge from Code Geass), but has decided to stay away from all black cosplay since he lives in Arizona - it's really hot in that state, you know.

He also loves anime, which makes a lot of sense, seeing how the entire American Kitsune series is basically just one big anime parody.

Email ThisBlogThis!Share to TwitterShare to FacebookShare to Pinterest
Labels: Cover Reveal, Fantasy, YA