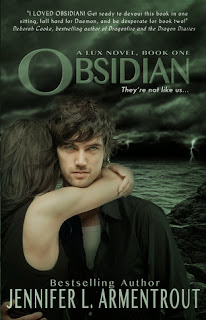 Book One in Lux Series
Published on November 23rd 2011

Goodreads Review : Starting over sucks.
When we moved to West Virginia right before my senior year, I'd pretty much resigned myself to thick accents, dodgy internet access, and a whole lot of boring.... until I spotted my hot neighbor, with his looming height and eerie green eyes. Things were looking up.
And then he opened his mouth.
Daemon is infuriating. Arrogant. Stab-worthy. We do not get along. At all. But when a stranger attacks me and Daemon literally freezes time with a wave of his hand, well, something...unexpected happens.
The hot alien living next door marks me.
You heard me. Alien. Turns out Daemon and his sister have a galaxy of enemies wanting to steal their abilities, and Daemon's touch has me lit up like the Vegas Strip. The only way I'm getting out of this alive is by sticking close to Daemon until my alien mojo fades.
If I don't kill him first, that is.

My Review : Kat has just moved to West Virginia, starting a new year can be really hard! Especially when you live next door to twin aliens. Dee and Daemon are called the Luxen, from a planet called Lux! They came here when their home planet was destroyed by the evil Arum who are still hunting down Luxen to take their powers. And they will use Kat to get to them.
I was surprised at how much I loved this book. At first I wasn't very impressed. The whole scene at the Library where Daemon saves Kat and some other parts at the beginning reminded me a lot of Twilight, and I'm not a big fan of characters who have to be constantly saved. But man was I wrong!!
Kat is definitely a kick-ass character! Not only does she have pretty awesome comebacks when Daemons being an ass! But she also knows when to fight back, and how to do it!
Daemon. Oh man! With his looks and his attitude.. HE IS ONE HOT PIECE OF ALIEN MEAT! He's like a mix of Damon from Vampire Diaries and William Herondale from the Infernal Devices. I love his witty comments, and when he is an ass to people, its because hes trying to protect someone!
This book has amazing characters and tons of action and fights and cool alien tricks! I love the relationships between Daemon and Kat, and Daemon and his sister Dee!
I highly recommend this book to everyone! It was pure amazingness!