Under The Never Sky by Veronica Rossi 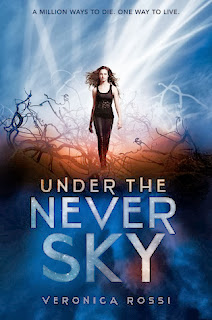 Goodreads Review : Exiled from her home, the enclosed city of Reverie, Aria knows her chances of surviving in the outer wasteland--known as The Death Shop--are slim. If the cannibals don't get her, the violent, electrified energy storms will. She's been taught that the very air she breathes can kill her. Then Aria meets an Outsider named Perry. He's wild--a savage--and her only hope of staying alive.
A hunter for his tribe in a merciless landscape, Perry views Aria as sheltered and fragile--everything he would expect from a Dweller. But he needs Aria's help too; she alone holds the key to his redemption. Opposites in nearly every way, Aria and Perry must accept each other to survive. Their unlikely alliance forges a bond that will determine the fate of all who live under the never sky.

My Review : Another fantastic dystopian series. In this dystopia, people live in giant domes called pods, they never go outside, they just go into "Realms" which are fake world where you could imagine and do anything you could ever want to do without any harm to you. When Aria's mother is transported to another pod, they lose contact for about a week, beginning to worry she seeks help from a reckless boy. When they go into a dangerous part of the pod, the boys set fire and it is quickly spread. To a surprise a wild savage named Perry comes to her rescue from outside the pod. When Aria is framed for starting the fire, she is kicked out of the pod. People like her aren't meant to live on the outside, the air is different, filled with disease. There are wild people and animals out there. Can Aria survive?
I wasn't expecting this book to be as good as it was, it definitely kept getting better and better as it went on. I absolutely loved the romance in this book. I am way too tired of seeing couples meet and fall in love at first sight. In this books when the two characters met, they hated each other, they believed the way the other one looked was unnatural and ugly, but when they got to know each other, they learned to love the differences in each other. It reminded me a quote saying "When you love someone, everything about them becomes beautiful." It fit perfectly with this book and I loved it. I love Aria's character, how she never gave up, even when her feet were killing her and she thought she was dying. I love how keen she is for knowledge, she learned to fight with a knife in a matter of days, and she learned how to take care of herself and find her own food pretty fast.
The only thing the author could have changed was explaining the different terms better, like Aether. If things like that were explained a little more it would have made it easier to understand.
Can't wait to read the next one.