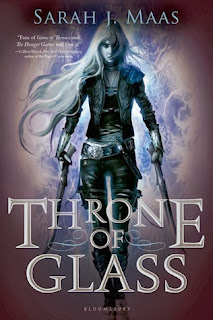 Goodreads Review : In a land without magic, where the king rules with an iron hand, an assassin is summoned to the castle. She comes not to kill the king, but to win her freedom. If she defeats twenty-three killers, thieves, and warriors in a competition, she is released from prison to serve as the king's champion. Her name is Celaena Sardothien.
The Crown Prince will provoke her. The Captain of the Guard will protect her. But something evil dwells in the castle of glass--and it's there to kill. When her competitors start dying one by one, Celaena's fight for freedom becomes a fight for survival, and a desperate quest to root out the evil before it destroys her world.

My Review : One of my new favorite books! Celaena Sardothien is known as Adarlan's Assassin, but when she is caught and sent to work in the salt mines, its a charming prince and a sexy captain of the guard who come to save her. They offer her a deal to get her out of the salt mines. Fight your way through 24 criminals and assassins, and become the King's champion. What Celaena doesn't know is that theres a misterious evil that haunts the castle and is killing the competitors, it is up to Celaena to stop the evil before it kills her and its her duty to win the title of the King's Champion and win her freedom.
I loved this book from the start, I absolutely love Celaena's character, how shes not only beautiful but smart. She may be an assassin, but she has a kind heart and has a conscience.
And lets not forget the amazing love triangle! I still cant chose between Chaol and Dorian. Dorian is so smart and caring, who doesn't love a guy who can read books and loves puppies. But on the other hand theres Chaol, he may not be outspoken like Dorian, and he may hold his feelings back, but he knows his way around the sword, and hes saved Celaena more than once, how could you not fall in love with guy like that.
I would recomend this book to all the fans of Lord of the Rings, the Hunger Games, Game of Thrones, and Iron Fey series. Such a great book. Can't wait for the next one