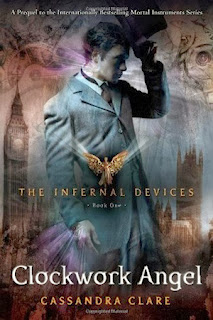 Book One in Infernal Devices Series

Goodreads Review : In a time when Shadowhunters are barely winning the fight against the forces of darkness, one battle will change the course of history forever. Welcome to the Infernal Devices trilogy, a stunning and dangerous prequel to the New York Times bestselling Mortal Instruments series.
The year is 1878. Tessa Gray descends into London’s dark supernatural underworld in search of her missing brother. She soon discovers that her only allies are the demon-slaying Shadowhunters—including Will and Jem, the mysterious boys she is attracted to. Soon they find themselves up against the Pandemonium Club, a secret organization of vampires, demons, warlocks, and humans. Equipped with a magical army of unstoppable clockwork creatures, the Club is out to rule the British Empire, and only Tessa and her allies can stop them....

My Review : This is probably my favorite book of all time. If you've read the Mortal Instruments you have to read this series right away.
In this series a girl named Tessa comes to London expecting to be living with her brother. When she lands she is taken by the mysterious Dark Sisters. They trap her in a house and force her to "change." What Tessa didn't know is that she has the power to change into different people, not only does she look like them but she can also access their memories. After being held prisoner by the Dark Sisters, they reveal to her that she is to be married to the Magister, when Tessa's escape plans fail, she is surprisingly rescued by none other than William Herondale.I loved how there was a connection to the original series, we get to meet the Herondales, the Lightwoods, and the Fairchilds. This series has very interesting characters. Tessa is an amazing girl, she loves books, and she is just a very smart and intellectual character. There's just something about her that everyone loves, including the two main male characters. William Herondale is a spitting image of Jace, they're both super hot, mysterious, and lovable. The only difference is that Will has black hair, and blue eyes. Jem Carstairs is the other main male character, he is of Asian descent, yet he is striking with his silver hair. Unlike Will, he is very slim but has a soft layer of muscle. Jem is just smart, lovable and gifted on the violin. While Will is more mysterious and sometimes rude (but super hot), Jem is the kind and caring soul that all the girls want. This is one of the main reasons why i love this series, is because i can't pick between the two guys, they're both just so amazing. I don't want Tessa to end up with either of them so i can have them to myself. I could only wish. Anyways, read this book, and you wont regret it!
Posted by Aneta at 12:17 PM