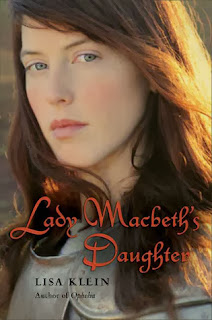 Goodreads Review : Albia has grown up with no knowledge of her mother of her father, the powerful Macbeth. Instead she knows the dark lure of the Wychelm Wood and the moors, where she’s been raised by three strange sisters. It’s only when the ambitious Macbeth seeks out the sisters to foretell his fate that Albia’s life becomes tangled with the man who leaves nothing but bloodshed in his wake. She even falls in love with Fleance, Macbeth’s rival for the throne. Yet when Albia learns that she has the second sight, she must decide whether to ignore the terrible future she foresees—or to change it. Will she be able to save the man she loves from her murderous father?  And can she forgive her parents their wrongs, or must she destroy them to save Scotland from tyranny?
In her highly anticipated follow-up to Ophelia, Lisa Klein delivers a powerful reimagining of Shakespeare’s Macbeth, featuring a young woman so seamlessly drawn it seems impossible she was not part of the Bard’s original play.

My Review : Such a lovely book!!!!
In this re-telling of Shakespeare's Macbeth. Lady Macbeth had a daughter, and of course Macbeth decided to get rid of her, because she wasn't the son he wanted. When the daughter was being sent to be killed, one of Lady Macbeth's servants decided to take her and raise her as her own child. What no one knew, was that this particular servant had 2 other sisters, which later pretended to be the 3 witches from the main story. This story revolves around Albia, and how she ended up at Fleance's house and how they fell in love. But Albia has a bigger mission in mind, she plans to kill her father, the evil Macbeth, even if it means death for her.I definitely loved this book a lot. I loved the original story by Shakespeare, but of course I love this one more, since its told in the perspective of a teenage girl. I would definitely recommend this book to any fans of Shakespeare, especially his younger female fans.
Posted by Aneta at 6:26 PM