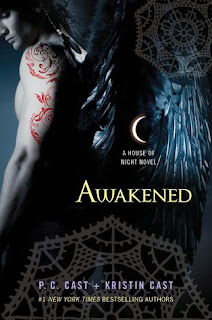 Goodreads Review : Exonerated by the Vampyre High Council and returned to her position of High Priestess at Tulsa’s House of Night, Neferet has sworn vengeance on Zoey.  Dominion over Kalona is only one of the weapons she plans to use against Z.  But Zoey has found sanctuary on the Isle of Skye and is being groomed by Queen Sgiach to take over for her there.  Being Queen would be cool, wouldn’t it?  Why should she return to Tulsa? After losing her human consort, Heath, she will never be the same – and her relationship with her super-hot-warrior, Stark, may never be the same either…
And what about Stevie Rae and Rephaim?  The Raven Mocker refuses to be used against Stevie Rae, but what choice does he have when no one in the entire world, including Zoey, would be okay with their relationship?  Does he betray his father or his heart?In the pulse-pounding 8th book in the bestselling House of Night series, how far will the bonds of friendship stretch and how strong are the ties that bind one girl’s heart?

My Review : This series was really good at the start but now i feel like its being dragged on way too long! I love all the characters, except for Zoey and Neferet! They both just make me mad and it made me start to hate them! I don't think i could continue reading this series, I'm bored with it now. Good luck to Stevie and Rephaim, I ship them.
Posted by Aneta at 3:09 PM